On a recent Thursday night I logged into my brokerage account and saw an extra digit I’d never seen before:

When I was in my early 20s, I didn’t think becoming a millionaire at 35 was even possible. Back then I didn’t have much money, but the little extra that I did have I saved and invested. So this is proof of what can happen when you do that:

You might think when your account rolls over to seven digits that fireworks light up the sky, confetti falls, and the champagne starts flowing. I can tell you that doesn’t happen. In fact, it was pretty anti-climatic. I was like, “Oh, cool,” and then went back to work.

Honestly, the financial milestone that really mattered to me was making my first $1,000 from investing. That meant investing could make me $10,000, which meant it could make me $25,000, and so on.

Recently, a 25-year-old reader emailed me to ask where I was financially when I was his age. If you find value in benchmarking yourself against me, and it’s probably irrelevant, you can use this chart: 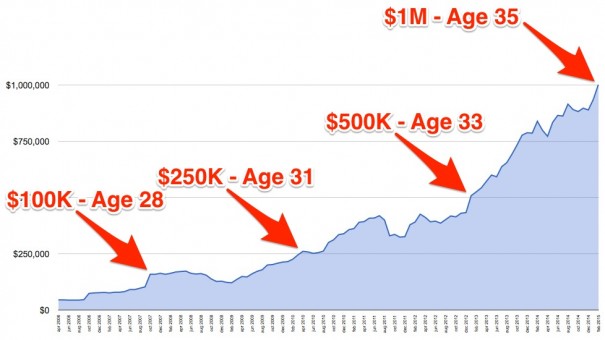 As you can see, getting to $1 million isn’t a straight line. There were times I lost a lot of money in the market. For instance, before the financial crisis in 2008 I had $175,000. Just nine months later I had $120,000. When that happens it’s scary, because you think you’ll never get the money back.

But you have two choices when the market is falling. You can flee in fear, or you can stay the course. If you let fear take ahold of you then you’re likely to make the wrong choice. Psychologically, it’s pretty normal to equate price volatility with risk, and ironically end up doing risky things, like selling out at the worst possible time.

Anyways, during the crisis I remember the “talking heads” saying to invest 100% in safe Treasury bills or bank CDs. For the people who took that advice they’re now earning essentially nothing on their savings that they thought would support them in retirement. If they hadn’t acted out of fear they could have built a great retirement portfolio.

I was fortunate to reap the rewards of staying the course, and now when my investments drop $70,000 in a month (which recently happened) I recognize it’s just part of the process of building wealth.

How long does $1 million last

But when I plug my numbers into the retirement calculator FIRECalc — yearly spending of $36,000, $1 million portfolio, and 51 years left to live (based on the US government’s death calculator) — it says there’s a 98.9% chance the portfolio won’t be depleted before I die.

And that means I never have to work again. Even better, there’s a few key assumptions not in this calculation:

What I worry about is having kids, and their impact on spending. I think I could raise a kid for like $100,000, but what do I know when the USDA says it can cost $500,000. I just don’t know, but my best guess is that my finances would be okay.

What’s the secret to becoming a millionaire

I didn’t win the lottery, I didn’t inherit any money, and I didn’t start a company. If you’re in the same situation I am, then the fastest way to $1 million is to earn more while spending less. Those are the two levers you have control over.

I found the best approach was to go after big wins, not like these crazy people.

Instead of peeling bananas at the store to save a few cents that person could be:

Those are the big wins. It’s where a lot of money is hiding. So tackle those first before moving on to saving money in the produce aisle. Now, if you’re pulling on the earning and spending levers you’re going to want to see the results, right?

How to track your income, spending, and investments

I know what you’re thinking. “Boring!” Nobody wants to plug numbers into a spreadsheet. I’m weird because it might be one of my favorite things to do. The reason you should at least try it for a month is because you’ll learn at least one thing about your finances that you didn’t know.

For example, in the late aughts I knew I was spending a lot but I didn’t know it was almost as much as I was earning. I gained this awareness, and that lead me to making a decision in 2010 to set a goal to become financially free.

Not surprisingly, after decreasing my spending and increasing my income the amount of money I was able to save exploded. I went from having about $10,000 a year to invest to having over $40,000.

To become financially free you need to reach the crossover point. That means if you withdraw 4% of your investments it meets (or exceeds) your yearly spending. 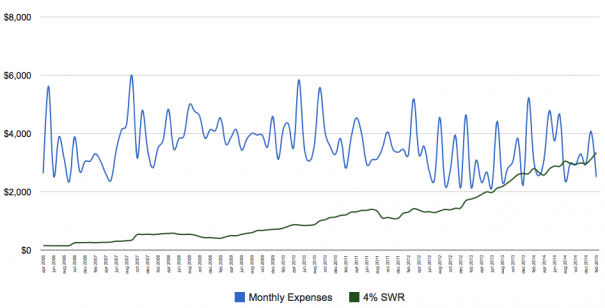 On average, I used to spend $4,000 a month. But by decreasing my spending to $3,000 I was able to reach the crossover point faster. To say that another way, the higher your expenses the more money you’ll need to accumulate to reach financial freedom. 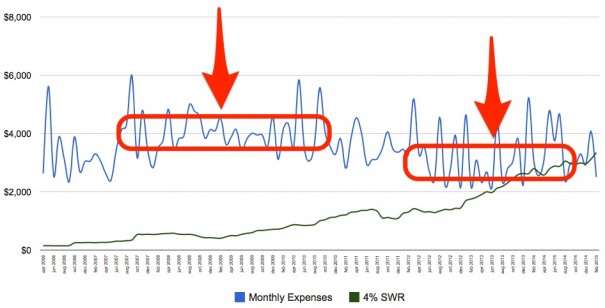 I know I’m fortunate to be where I am. While I wasn’t excited about reaching my goal, it does allow me to live life in a way that seemed impossible just a few years ago:

Most importantly, I’ve learned that money is infinite. If you work you can get more of it, or you can let your investments compound. You can turn $1 million into $2 million. There’s always more of it out there.

But time is finite. We all have a limited number of years left, and what’s most valuable is having the freedom how you spend it.