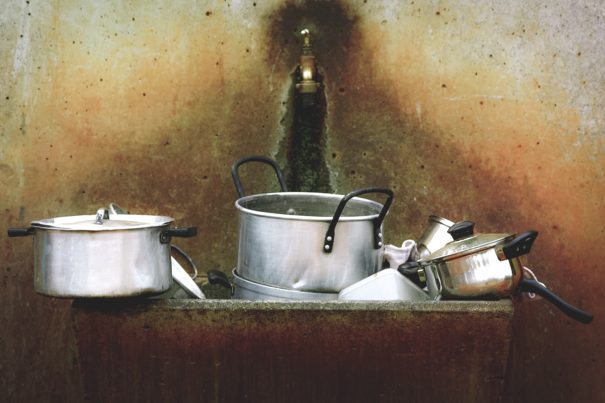 Washing dishes was how I earned my first paycheck. When you’re 15 years old and don’t get money from your parents to buy things then you have to work.

So there I was scrubbing dishes in the filthy kitchen of a small family-owned Italian restaurant, and it’s where I learned a little life lesson.

Work is nothing more than trading time for money. A medium of exchange.

You provide one hour of time to an employer and they provide an hour’s wage. I quickly discovered teenager’s time isn’t worth all that much, a measly $4.25 per hour.

Not long after starting that job I wanted this Blind Melon album. You might remember their catchy song “No Rain.”

One Saturday afternoon, wandering the aisles in Kmart’s electronics department, I saw it for sale. “Cool, I’m getting it.” The price was $16.98.

For whatever reason I did the mental math to figure out the album didn’t really cost me $17.

No, it cost four hours on your feet washing never-ending streams of bus tubs overflowing with half-finished plates of meatballs. “Is this CD worth four hours of my time?”

In this case it was, but more importantly you realize the money tucked in your wallet isn’t money at all, it’s time disguised as money.

In fact, it was Benjamin Franklin who said, “Time is money.” But in our hectic day-to-day lives it’s easy to forget this.

Anyways, throughout my teens I worked a series of jobs — bagging groceries, stocking merchandise, theater concessions — and mostly saved my earnings. My time was too precious.

And then I went off to college, started a career, and forgot what I’d learned.

Have you heard that saying from Texas, “Big hat, no cattle.” Meaning, you can look rich but be poor?

It’s hard to believe people who make lots of money are poor, but then your tax preparer tells you they see plenty of families making $300,000 and living paycheck to paycheck.

Thomas Stanley profiles these folks in The Millionaire Next Door. The doctor and lawyer types who drive fancy cars, live in exclusive neighborhoods, and take exotic vacations. They look rich but it’s an illusion.

It’s the families who make $100,000, spend $40,000, and have $1 million in the bank who are rich. Isn’t the worst irony the simplest way to get rich and have lots of money to spend is by not spending lots of money?

I know this because back in my 20s I spent just like the next person. You think acquiring lots of material possessions, satisfying all your superficial desires, is the key to happiness.

It took me years to relearn what I knew as a teenager: the things you buy with money, that you surround yourself with, aren’t things at all. It’s your time.

And research shows it’s having control over your time that makes you happiest. Not money and things.

Which reminds me of what Stoic philosopher Seneca once said:

“It’s not that we have a short time to live, but that we waste much of it. Life is long enough, and it’s been given to us in generous measure for accomplishing the greatest things, if the whole of it is well invested. But when life is squandered through soft and careless living, and when it’s spent on no worthwhile pursuit, death finally presses and we realize that the life which we didn’t notice passing has passed away.”

What he’s saying is when you’re about to die you realize life is time, and doesn’t that make time your most precious resource?

And on the other side of that trade is everything you’ve consumed. Sure, necessities like food, clothing, shelter, and healthcare, but probably a bunch of other stuff you’ve totally forgotten about buried in the back of some closet.

But people are always telling me they’ve earned $1 million over the past 10 years and have nothing to show for it and it makes them sick.