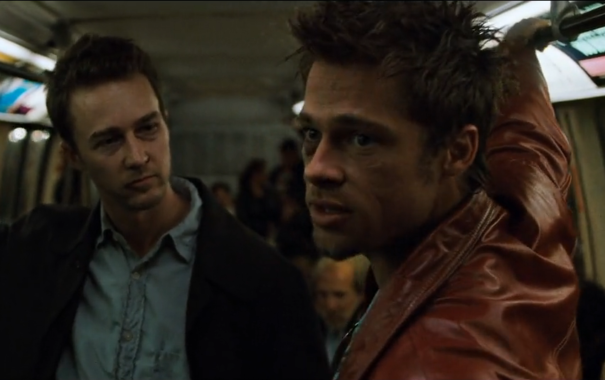 A year ago I watched Fight Club, so now I’m watching Fight Club again as a reminder how much I’ve grown.

You see, last year I put down my 14-year-old cat, quit a career that took 15 years to build and retired at 37 (while everyone was telling me I was nuts), and ended a four-year relationship.

All those things happened in three months, and when huge changes are all happening in three months it can feel pretty overwhelming. That’s when you lay on the couch and watch Fight Club and Brad Pitt’s character Tyler Durden says something that resonates with you:

“It’s only after we’ve lost everything that we’re free to do anything.”

I think it would have been easy for me to sit around my stuffy condo, sitting there, drinking orange juice, feeling sorry for myself. But I saw it as a once-in-a-lifetime opportunity for growth.

Why? If you stay the same you’re going to get what you’ve always gotten.

Lately, doing interviews or podcasts, I get asked, “What does your day look like?” and I never know how to respond to that question, but here’s the answer: I’ve been spending the last year transforming myself into the person who can get the things they want to get.

So, if you’ve been wanting to know how much you need to be financially independent, it comes down to the “4% rule”.

The 4% rule means you can safely withdraw 4% from your investment accounts each year, adjust your withdrawal for inflation, and never run out of money.

Originally, the 4% rule applied to traditional 30-year timeframes but now it works for any time horizon. In this Reddit AMA Bengen said, “If you plan to live forever, 4% should do it.” (The new rule for a 30-year timeframe is 4.5%.)

I always told myself I’d be financially independent with $1 million because I spent about $40,000 per year. That’s 4% of $1 million.

When I finally convinced myself to quit my 9-5 job the investments could support a 3% withdrawal, and now that I’m a couple years into early retirement I’m withdrawing a measly 2%. What’s going on?

Well, two things are happening. First of all, I didn’t realize how much “work” was costing me: commuting every day, buying new “work clothes”, paying for convenience.

Without the overhead of a job my yearly spending has gone down by 15% or so, and as I’m sitting here watching my spending go down my investments are growing.

I knew I was overthinking quitting because I overthink everything to an absurd degree, and the 2% withdrawal confirms that.

Anyways, if you reverse the math on all this you can simply multiply your yearly spending by 25 to find your “number”. You should do this right now.

Here, let me show you:

So when you hear people say that $1 million or $2 million isn’t enough to retire they’re not wrong. What they’re saying is they have an expensive lifestyle.

That’s how you become financially independent, it’s all about the relationship between your numbers.

Which reminds me of a meeting I had with an executive once. We were pretty close, and he shared with me that he hated his job and didn’t want to keep doing what he was doing. I’ll never forget what he said.