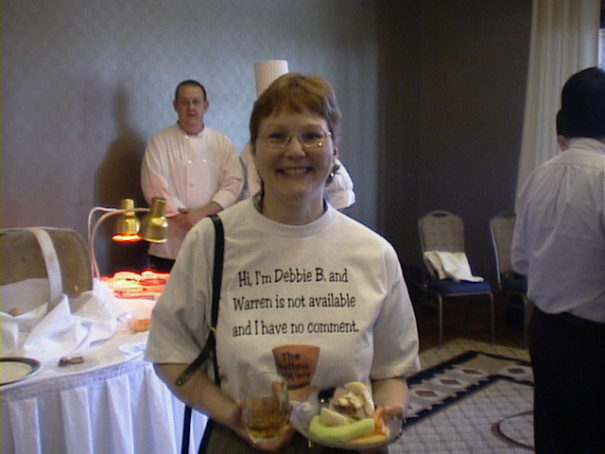 Warren Buffett turned me down for an interview. It was his secretary, Debbie B., who wrote me back:

“Thanks for the nice note. However, Mr. Buffett has asked me to turn down all requests. His plate is more than full now, even at the age of 84.”

Then I asked her if it was true mentioning her name at Gorat’s, an Omaha steakhouse, will get you an extra boat of gravy when you order the hot roast beef sandwich. I heard that once.

She told me it won’t, but you can probably get it anyway without mentioning her name.

Anyways, you don’t have to talk one-on-one with Buffett to learn from him. Every year he writes a letter to shareholders that you can read for free online (or buy a compilation).

I’ve been combing through them taking notes, and one event that stood out to me was his investment in Freddie Mac, the mortgage loan company.

“[…] we made major purchases of Federal Home Loan Mortgage Pfd. (“Freddie Mac”) and Coca Cola. We expect to hold these securities for a long time. In fact, when we own portions of outstanding businesses with outstanding managements, our favorite holding period is forever.”

“We try, therefore, to keep our estimates conservative and to focus on industries where business surprises are unlikely to wreak havoc on owners. Even so, we make many mistakes: I’m the fellow, remember, who thought he understood the future economics of trading stamps, textiles, shoes and second-tier department stores.”

What’s impressive is he held this investment for 12 years considering studies show the average holding period is just three months.

Here’s the thing about investing. When you’re only investing for three months you’re not really investing you’re trading, and trading is what destroys your potential wealth.

Want proof of this? One study found that investors who fiddled around with their investments earned 6.5% less than those that didn’t.

One of the students taking my course told me during the recession she didn’t bother looking at her investments because she was too scared to. She said she would’ve panicked and pulled her money out, and we know that would have been at the worst possible time.

So, you can make more money investing, and work less at it, if you simply hold for long periods of time. And holding is probably the only edge individual investors have anymore.

Here, let me show you an example of how holding can work. In 2009 I bought shares in the video game publisher Activision Blizzard. Over the next four years they lagged the market by 69%.

It’s hard sitting there watching your money underperform the market year after year when you can make more money with a savings account.

But now, eight years later, these shares are crushing the market by 266%.

So, you’re probably always better off doing nothing. But, if you want to sell, here’s the basic criteria I use:

Like Buffett, I’m never quick to sell. And when I do, I see it as an opportunity to become a better investor.

When you sell you should be refining how you invest, and improving your ability to make better decisions. As a result your portfolio should improve.

You can be intentional about this. I track everything I’ve sold in a spreadsheet, and look at this frequently. It helps me constantly assess my thinking about past investments. 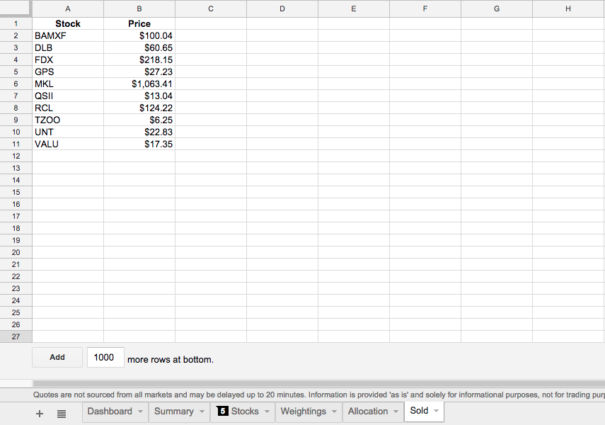 Second, I write down my reasons for selling in an investing journal. I keep that in Google Docs. Every so often I’ll re-visit the reasons why I sold, and spend some time thinking about if my decisions were logical and objective.

Here, I can show you what this looks like. Everything I’ve ever sold, along with a snippet of reasoning:

BMW — I bought a position in 2006 and sold four years later at a 1.03% gain. I didn’t like the auto industry because it’s capital intensive and doesn’t grow very fast.

Dolby Laboratories — I bought in 2006 and sold in 2015, taking a 6.48% loss. I didn’t believe they could convert consumers to new technologies like mobile and streaming.

FedEx — I bought a position in 2006 and sold five years later at a 17.18% loss. They continue to show slow and steady growth, but I wanted to redeploy the capital in better opportunities.

Gap — I bought this retailer in 2006 and sold a year later at a 0.19% gain. I thought the apparel retail sector was too competitive, and consumer tastes change too fast.

Markel — I bought this “baby Berkshire” in 2006 and sold five years later at a 0.59% gain. This speciality insurer continues to outperform the market, but I wasn’t interested enough to follow it.

Quality Systems — I bought this healthcare tech company in 2007 and sold eight years later at a 1.34% loss. It outperformed the market for years, but over time I lost faith in their ability to grow market share.

Royal Caribbean Cruises — Attempting to diversify my portfolio in 2007, this pure play seemed like a good approach. I decided I didn’t like cyclical sectors, and sold in 2009 at a 59.48% loss.

Travelzoo — I bought a tiny position in this daily deal site in 2011 and sold four years later at a 77.81% loss. I didn’t think they had an ability to grow cash flow and net income.

Unit Corporation — I bought this oil and natural gas company in 2007 in order to diversify my portfolio. I decided I didn’t like cyclical sectors, and sold in 2011 taking a 5.04% loss.

Value Line — I bought a position in this financial services company in 2007, and two years later sold at a 32.44% loss. I didn’t think they could grow cash flow and net income.

Remember, doing less leads to higher returns, and that’s why I hate selling. But I also understand that it can hurt you more to keep holding.

And I always see investors getting hung up on this, especially when they’re looking at a loss. They think about what they paid, or where an investment has been, and calculate their chances of getting back to even.

But the market doesn’t know or care about what you paid. The only thing that matters is if your money is invested the best way it can be, going forward.

Sometimes that means selling and moving on, and even Buffett does that.