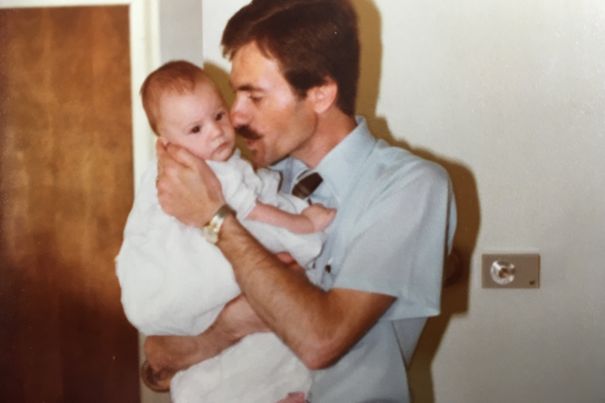 I’m listening to my dad’s funeral service. He was killed riding his motorcycle 10 years ago. Witnesses said he was going 40 miles per hour and a 19-year-old waitress driving an SUV didn’t yield on a left turn. He ended up face down on the pavement. She was charged with criminally negligent homicide.

I know all that because I emailed the police department to get the report.

I didn’t go to his funeral because we hadn’t spoken in 12 years. I regret not going. My aunt, his sister, sent me a CD of the service. I ripped it to an MP3 so I could store it on my iPod and I listen to it every year on the day he died.

Maybe the best thing he taught me was how important investing was. Because when I was a kid he bought me a single share of Wrigley stock. I thought it was cool because every Christmas they’d send me a free box of gum. Probably why he chose it.

Anyways, every day I’d check the stock price in the newspaper to see if I made money. I loved it! I didn’t really know anything about investing then, but I learned it was a way I could grow my money.

Then my parents were getting a divorce. He was moving to a different state. It was messy. I remember him telling me in the basement, “You’re going to be the man of the house now.” He showed me how to put salt in the water softener. I think I was 15 or 16.

I don’t remember very much about that time. I went to college and spent my time partying. I got nearly straight-A’s most of the time but I was miserable.

The Clintons have all their money in an S&P 500 index fund. Shouldn’t they be paying a team of financial advisers to tell them what to do? I guess not.

Over the short term you don’t always make money investing though. That’s why it can feel scary. I lost a lot during the recession. In nine months my portfolio went from $175,000 to $120,000 and I was thinking, “I should have sold everything when I had the chance.”

But I knew that over the long term the market always goes up. So as delusional as it felt I kept on investing and looking back it’s hard to spot where the recession was.

Warren Buffett says, “Investing is simple, but it’s not easy.” And it’s true. You can put all your money in index funds. That’s simple. Then you have to do nothing. That’s hard.

People got scared and they sold. But the market rebounded and now it’s up over 4% for the year. That’s when they get back in. Buy high and sell low.

The mistake most investors make is not knowing how they’re going to react when the market goes down. So what you can do is figure out how much risk you can tolerate and then invest your money appropriately between stocks and bonds.

If you can tolerate more risk you invest a larger percentage in stocks. Less risk? You do the opposite and invest more in bonds. This is something called asset allocation and one of the best books about it is The Intelligent Asset Allocator by William Bernstein.

There’s a chart in that book that says if you can tolerate losing 35% of your portfolio, but earn higher returns over the long term, then invest 80% in stocks and 20% in bonds.

That’s all you really need to know. What you’re doing with asset allocation is managing risk. Yes, you’ll still feel scared when the market goes down and you’re losing money. That’s natural.

But you’ll be less likely to react and ironically end up doing a risky thing, like selling at the worst possible time.