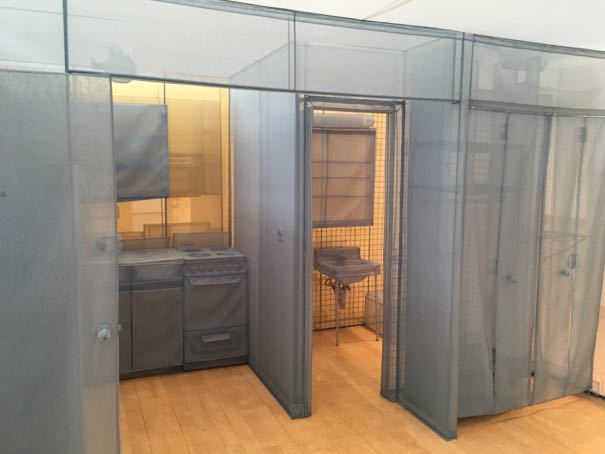 I’m wandering around this full-scale replica of a New York City apartment. And I’m wondering if the artist ever thought about giving up as he was sewing every little detail in translucent fabric. Because I think that’s the hardest part about life: Knowing why you’re doing what you’re doing.

For years I didn’t know why I was doing what I was doing. I was getting up, driving to work, dealing with an inbox full of problems, driving home, eating dinner, watching TV, and then doing the same thing the next day.

I didn’t question it because that’s just what everyone does. But then it hit me. “Wait. I have to do this for the next 40 years?”

Derek Sivers says knowing why you’re doing what you’re doing is the most important thing in life. Because most people don’t know, and then they end up on their deathbed regretting spending their whole life letting other people decide what’s important to them.

Don’t want to be like them? It takes three things: Introspection to figure out what’s important to you, discipline to live life according to your own rules, and the confidence to write your own story. So it’s easier going with the flow, but you won’t understand the tradeoff you made until it’s far too late.

I’m not saying you should do any of these things, it’s just what’s helped me.

When you build a system by automating your personal finances it means you’re not wasting your time and energy moving money around and making decisions because all the decisions have already been made for you.

And part of this system is automating your investments. If we assume an annual market return of 7%, a 25 year old who automatically sends $10 a day to their investment account can have $270,000 by age 50. Here’s what that looks like. 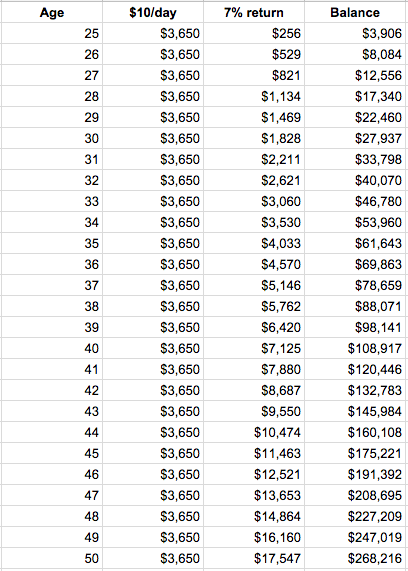 And taking the time upfront to build a system means all you have to do is change the amounts when you can afford to and the system takes care of the rest.

With investing there’s a lot of people making forecasts and predictions. But here’s a simple way to convince yourself these people are guessing: Read last year’s predictions. Here, I’ll do it for you.

So I’m googling last year’s predictions and find Rich Dad, Poor Dad author Robert Kiyosaki is predicting the market is going to collapse and you should be buying gold and silver. 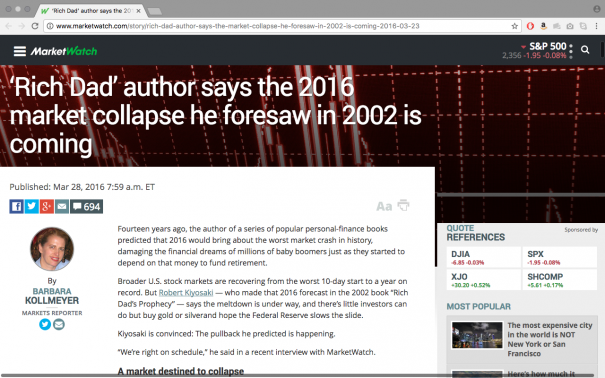 Was he right? Well, if you took his advice you missed out on the 9% gains for the year. Here’s how I think about predictions: Even a broken clock is right twice a day.

Meaning the people making predictions are going to guess right about half the time, and studies prove this. Out of 6,582 predictions from 68 different experts the average accuracy was 47%.

This is why being successful at investing is so counterintuitive. Because when you’re working really hard at it by tinkering and tweaking and adjusting your investments what you’re really doing is destroying your future wealth.

Why do investors do so poorly? Because they’re tinkering and tweaking and adjusting. So, if you want to be better than the average investor it means doing something that most people can’t do, and that means putting up with years and decades of doing absolutely nothing.

Someone recently sent me an email saying I shouldn’t be writing about investing in things like index funds because it’s dangerous. I googled them and guess where they worked?

Yes, the same Wall Street where they get mad when their bonus is only $3.6 million. I get it though. When massive amounts of money is leaving your active funds and pouring into indexes it probably feels like you’re facing your death. 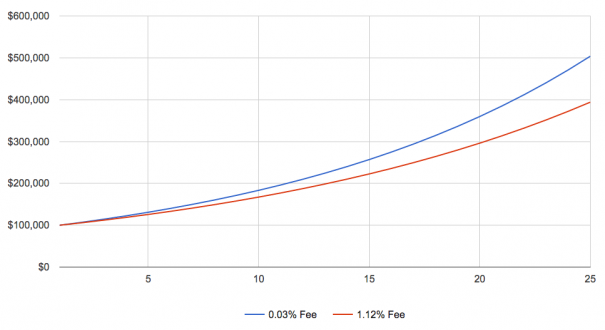 Behavioral biases are the biggest reason investors fail at investing. These are things like loss aversion and following the herd. In fact, these two tend to go hand-in-hand and lead to making bad decisions.

The financial crisis is a good example of this. At the time, the advice was to get completely out of the market and invest in Treasury bills or CDs. And I’ve gotten emails from people who did exactly this.

I get it though, we’re human and it’s easy to let our emotions take over. But if investing is really about not making decisions based on emotions how do you deactivate your emotions? Honestly, I’m finding the best method is meditation.

And before you tell me that’s woo-woo there’s a ton of science that proves meditation helps you process stress, make smarter choices, and improve resilience.