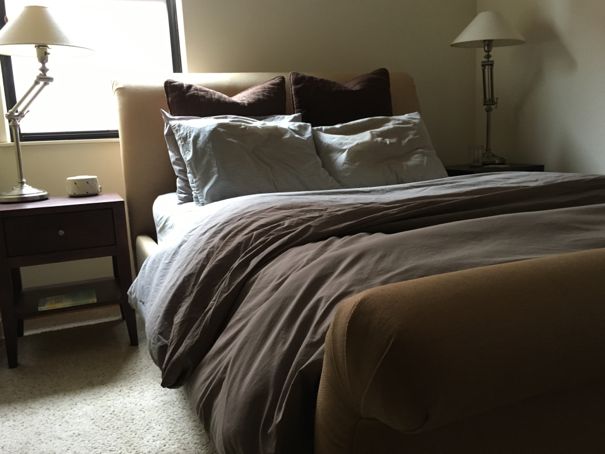 It started with recurring dreams about losing my teeth, getting cancer, going bald. I’d wake up drenched in sweat and then google what the dreams meant. And then I’d google if I should quit my job.

And I found a lot of good things about quitting but none of it dealt with the emotional realities of it: the self-doubt, the obsession with outcomes, and yes, the stress.

I think you should always get advice before making bigger life decisions so I started asking my mentors what to do. Other people tell you things you can’t see.

Penelope Trunk told me to quit when I felt like quitting. Ryan Holiday said there wasn’t going to be an easy answer. And I kept asking more people because I was hoping someone would tell me what to do.

But what I learned was that other people can’t make your big decisions for you. And over-intellectualizing it to an absurd degree was going to kill me. So I decided to just quit without knowing how things would turn out.

And now I know it was one of the best decisions of my life.

9 reasons why you have to quit

If you’re thinking about quitting you should probably just quit. But if you’re not sure I recommend doing what Steve Jobs did:

“I have looked in the mirror every morning and asked myself: ‘If today were the last day of my life, would I want to do what I am about to do today?’ And whenever the answer has been ‘No’ for too many days in a row, I know I need to change something.’ “

And if you decide quitting is what you want to do then you need a plan for what to do next: Either work or play. Pick one. You can’t pick nothing because you’ll get bored.

Quitting will still be terrifying, but you should feel terrified. Fear is a good compass for life. And if fear isn’t enough here are nine more reasons.

Mohammed El-Erian was making $100 million as CEO of the investment fund PIMCO. Then he had a fight with his 10-year-old daughter about brushing teeth and she went to her room and wrote down 22 moments of her life he’s missed because of work. He quit the next day because you can make a lot of money or you can see your kids but you can’t have both.

2. Measure you against you

We’re trained to want external validation. I mean, as kids that’s what school grades are about. And it’s why most adults blindly follow a life path they don’t even understand because they’re still trying to impress other people. But you can stop measuring yourself against other people and decide what things are important to you and start measuring yourself against those.

Studies show that when you stay in a company longer than two years you make 50% less. Because staying at the same company means getting 3% raises and waiting in line for promotions. The only way to make 10% or 20% more is to switch companies which is why switching companies every few years is one of the best ways to get paid more.

Do a what-if analysis to prove to yourself quitting isn’t dangerous. Start by writing down all the possible scenarios you can think of and then for each one write down what you would do. You’ll figure out you won’t go hungry or die of exposure. The worst possible thing is you have to go back to doing what you were doing which people do all the time.

5. To not hate your life

I was friends with an executive and he told me he hated his job and didn’t want to keep doing what he was doing. And then he said, “This is it for me,” meaning he was going to keep doing something he hated for the rest of his life because he wasn’t willing to give anything up (which is typical for guys in their 40s). But if you scale back spending you can take a pay cut and find a job that makes you happy.

Most of us spend our lives letting our job be our purpose in life. But that’s dangerous because when you stop working you’ll become miserable and depressed. But if you can practice being irrelevant now you’ll build resilience for when the time comes when you actually have to stop working.

Even when we have enough money we never have enough money. And that goes on and on until we say we want to sacrifice ourselves to build a dynasty so our grandkids and great-grandkids never have to work. But here’s the thing: In 100 years when you and everyone you know is dust your great-grandkids aren’t going to care you sacrificed yourself for them. This is your life, live it.

I was watching this documentary about people hiking the Pacific Coast Trail that runs from Mexico to Canada and one guy was saying he had to quit his job because it takes five months to do it. And he wasn’t worried about getting a job afterwards. Why? Because jobs are always going to be there which is why when you’re a top performer you can take mini-retirements.

9. Make your own rules

The conventional wisdom about how to live life was made up by people no smarter than you. That you should go to college, get a job, and then work 40 years. But those are somebody else’s rules, and you can adopt them or you can make your own. And most people about to die say their biggest regret is living a life other people wanted of them. And that’s what they’re saying: They regretted not making their own rules.