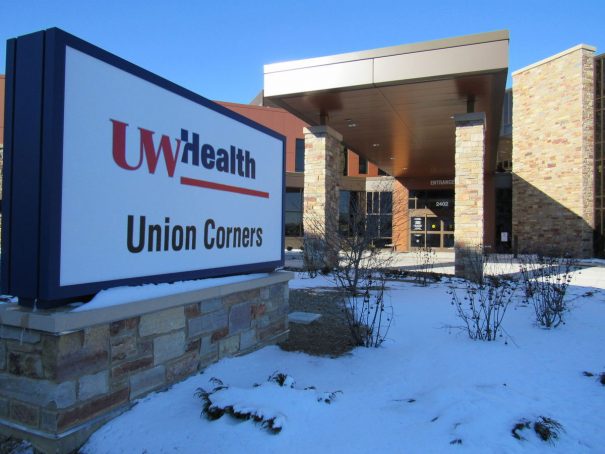 I think I’m dying. I’m having chest pains, shortness of breath, and body chills. So I’m driving myself to urgent care and when I get there I describe my symptoms to the check-in lady. She tells me to go to the front of the triage line.

After triage I see the doctor and tell him what’s going on. And then a nurse comes in and does an EKG. She leaves and now I’m sitting there waiting to find out how long I have to live.

The doctor comes back.

“You’re fine. Are you under a lot of stress at work?”

I like him because he tells me to read The Power of Now by Eckhart Tolle and to take a meditation class. He asks me if I want pharmaceuticals and I say no. He writes me a prescription anyways.

I realize I’m trying to do too much. A full-time job, running a website that’s turning into a full-time job, finding time for a life. Something has to give. And I already knew that because I tried to quit my job two months earlier.

My boss had invited me into his office and when I sat down he slid an offer letter across the table. It was for a promotion.

“I’ve been thinking about quitting.”

“Why would you do that?”

“Because I’ve been doing this for 15 years and I want a break.”

“Well, I’ll support whatever decision you make. Take the weekend to think it over.”

So how do you make big life decisions like this? My intuition is telling me it’s time to quit but I don’t trust it. I don’t know why not. So, I sit down at my dining room table and come up with a way to make a logical decision.

I write down what’s important to me. The ways I want to live my life. And I weigh the importance of each one and then score them against taking the promotion or quitting. 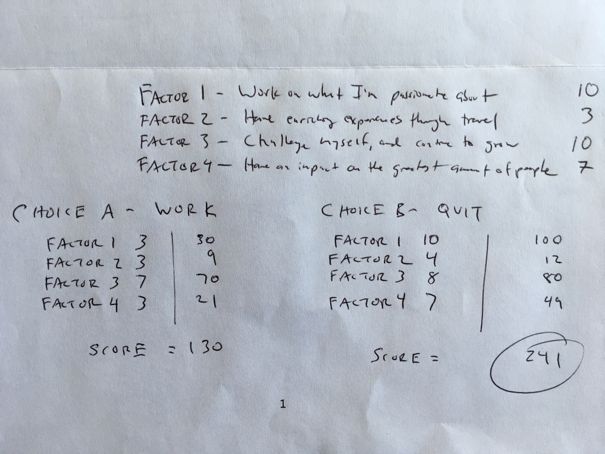 I feel like I’m crazy I’m doing this but I have my answer. Monday morning I show up in my boss’s office.

“I decided I’m going to quit.”

“Are you playing a card here?”

“Is it more money? More responsibility?”

“It’s me doing what I want with my life.”

“Well, if you stay, you have a really bright future.”

And I start thinking about the money I’m giving up. The career I spent 15 years building. My identity. I get scared and second-guess my decision. I take the job.

That was a mistake. It’s always a mistake when you don’t follow your intuition.

Or when you listen to everyone around you telling you what to do. What’s hard is convincing yourself everyone else is delusional and you’re the sane one.

So I work a few more months before I meet with my boss and tell him it’s finally time.

People tell me I’m lucky to retire at 37. For awhile I believed this until I remembered I’d been working towards this goal for at least six years.

Because that’s when I decided my time was more important than money because time makes you happier.

The first thing I started doing was tracking where my money was going. I had no idea I was spending most of it (89% to be exact).

And then I found the biggest expenses to cut. Like the $1,000 a month I spent flying airplanes. Then I worked on making cuts in other areas.

But you can’t frugal your way to financial freedom so I took my career and learned how to become more valuable because top performers earn more money.

By reducing what I spent and earning more money it caused my savings to skyrocket. The first year I was able to save 15%, then 30%, and then 45%. It topped out around 55%.

If you want to become wealthy it doesn’t make any sense to keep money in a savings account. You have to invest. So I put it in the stock market.

I lost a lot during the financial crisis but over the long term the market always goes up. And at 35 I became a millionaire.

Honestly, it was kind of a letdown. But I had enough money where I felt like I didn’t have to work if I didn’t want to.

In fact, I reached what’s called the crossover point. Meaning I had enough money that I could generate $40,000 in passive income for the rest of my life.

You know, setting a goal to become financially free was easy. Getting there was pretty hard. But quitting, walking away from one life to start another, that was the hardest.

Because the funny thing about money is you always feel like you need more. I was scared to walk away from it. But I was more scared of finding myself at the end of my life having never done what I really wanted to do.

And that’s not how you live life.