I sat down and noticed my stomach hanging over my jeans.

You see, for five years I’d been working out regularly. But then I discovered yoga and was trying to do both and that was turning me into one of those bros who practically lives at the gym and is obsessed with looking in the mirror and bragging about the chicks they’ve “slayed” and asking what’s up with all the “betas” here and I didn’t want to be like that.

So I decided to just focus on yoga. And that’s when I noticed my stomach because it turns out yoga doesn’t burn as many calories as working out. Then my friend mentioned he was doing Insanity (it’s this 60-day workout program you do at home).

I spent the next two months working out to DVDs in my living room (in my underwear, which is a nice perk), and after I finished the program I wasn’t out of shape anymore and even had some ab definition.

Okay, so what does me working out in my underwear have anything to do with investing? Because for practically everything we do in life, when we take more action we expect better results.

Using that same logic, when we take more action investing we should expect better results. Right?

Those might all seem logical, but let’s take a look a closer look at one of them in particular: Getting out of the market when it crashes (or goes down, or whatever).

Okay, so it’s really hard not to panic when you invest your hard-earned money and you start losing it. And the media doesn’t help either because they know to attract more eyeballs (which increases their ad revenue) they have to put out fear-mongering stories with BuzzFeed worthy headlines that you can’t stop yourself from clicking.

The stories typically follow the same narrative: The market is really scary right now and even Wall Street says it will definitely get worse so if you don’t do something right now then you’re probably going to lose all your money and be homeless and have to eat cat food the rest of your life (and not even the gourmet kind).

Here’s an example from the 2008 financial crisis. 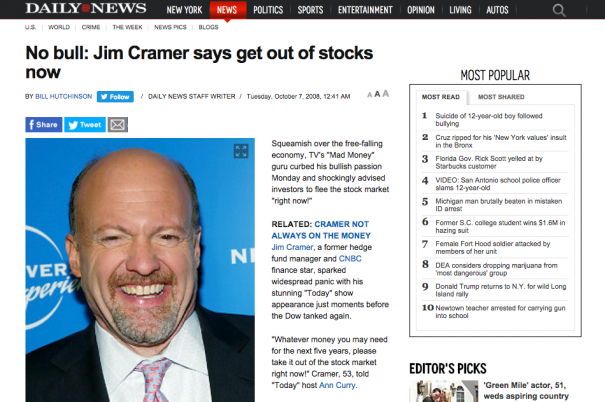 At the time, the media was advising everyone to get out of the market and invest in safe Treasury bills or bank CDs. Or even to get into cash. And the people who took this advice essentially made nothing. I know because I’ve gotten emails from them.

This story might be familiar to other investors, too. Getting scared into selling everything and then planning to get back in when it’s safe. The problem with this plan is most people don’t get back in and miss the huge gains from the inevitable rebound.

So what’s the lesson here? When the market crashes don’t take action.

I’ve been there myself. Before the financial crisis my portfolio had topped $175,000 and nine months later it was worth $120,000. (Collectively we lost $19.2 trillion.) It’s fascinating to take a look back at it. Here’s my portfolio during the crisis.

Yes, it’s scary losing lots of money. And there’s no way to make that feeling go away. But you can’t let those feelings influence you into making bad decisions. As hard as it was I didn’t do anything (except stick to my plan of investing every month). And if we zoom out here’s the effect the crisis had on my portfolio.

Pretty insignificant, right? So when the market’s crashing and everyone’s telling you to do something here are the three things I do.

Being able to bring up your portfolio and watch it in real time from any toilet seat in the world is pretty amazing. But when the market’s crashing, constantly checking how much money you’re losing acts as a negative feedback loop that makes you panic. Which in turn makes you want to do something (and it’s usually the wrong something).

If you can’t stop checking your portfolio, have a friend or significant other configure parental controls to block your financial websites. Seriously. (I have to do the same for time-wasting websites.)

2. Go against the herd

Want to see what a herd looks like? Okay, I took all the data of people putting money into the market, and pulling it out, and created this graph for you. 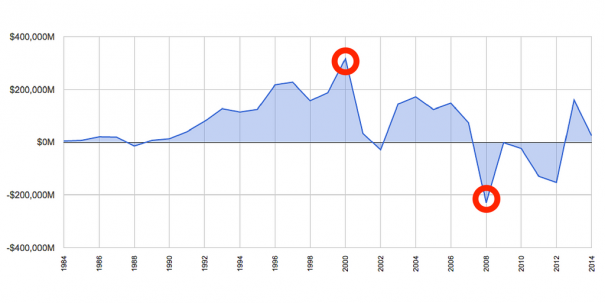 This means most investors are buying high and selling low which doesn’t make you any money. Instead, have an investing plan and stick to it (mine was to invest every single month).

3. Think in years and decades

You’ve heard the saying, “Past performance is not indicative of future results.” And that’s true, but here’s a fact to remember when the market’s crashing: The US has been prosperous for the last 240 years, despite disease epidemics, financial crises, natural disasters, terrorist attacks, wars, low inflation, high inflation, low debt, high debt, booms, busts, recessions, depressions, and on and on.

This is reflected in the overall direction of the market, which is up, and there’s no reason that won’t continue for the next 100 years, and beyond.