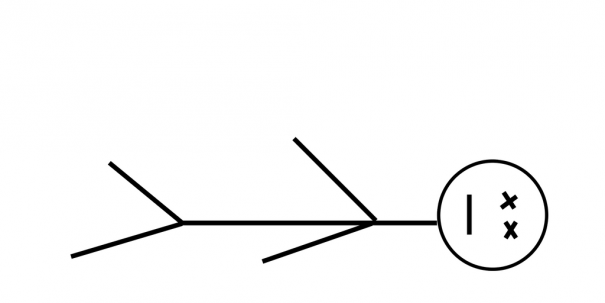 Four years ago I decided to start a website. And you know that site as Mr. Everyday Dollar. But what you might not know is that the Chris from four years ago was a completely different person because he was scared. Scared to put himself out there because that meant being vulnerable.

“What if what I write isn’t perfect?”

“What will people I know think about me?”

And that went on for a couple years until I reached out to J.D. Roth and asked him for advice on how I could improve. After all, he started the website Get Rich Slowly, turning it into a wildly popular site he eventually sold for a lot of money.

He must know a thing or two about success, right? He did, but I only half-listened to him.

And if I wanted to be successful I needed to be more vulnerable. To open up and share personal stories, the good and the bad, because that’s how people connect with one another. Through stories.

So, I added my first name to the site, and a picture on my about page.

About a year later someone asked me for a way to benchmark their own path to financial independence so I decided to publish an article about how I became a millionaire.

Rockstar Finance linked to it and then Libby Kane from Business Insider saw it and reached out asking if she could re-publish it.

The article went up even beating out Tony Robbins (I still love you Tony). 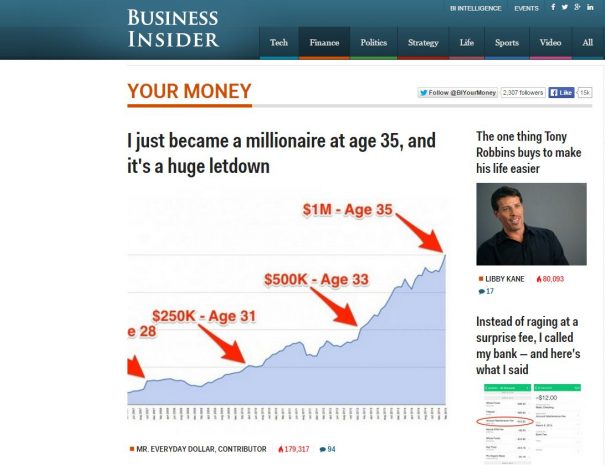 I learned that it’s one thing to put yourself out there semi-anonymously on your own site and it’s a completely different thing to be featured on a major news site read by millions and millions of people.

You would think I’d feel like I was on top of the world, right? But no, it didn’t feel good at all. In fact, I felt sick almost like I was ashamed or unworthy.

And that was the reason I was hiding behind the name Mr. Everyday Dollar, because those are the feelings you get from being vulnerable, and they suck.

Shortly after this Paul Sullivan from the New York Times reached out to me because he was doing a story on people who became wealthy. And I jumped at this opportunity because who turns down getting a blurb in the Times?

So we chatted on the phone and a few weeks later they sent over a photographer and I’m thinking, “Cool, a blurb and a photo.” I didn’t know they were going to put a full page photo of me on the front page of the “Wealth” section. 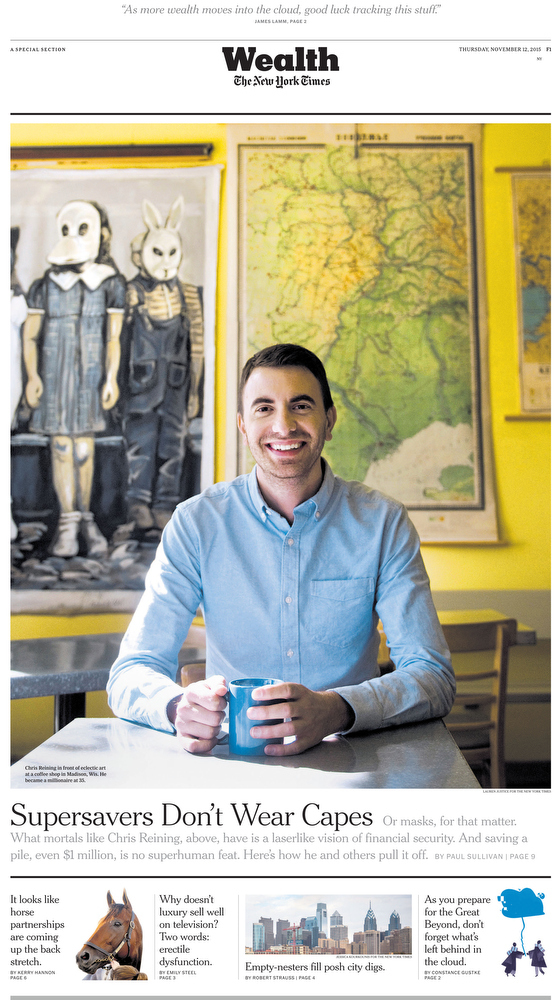 I felt sick, even worse this time. But now I knew why because I discovered Brene Brown and her ideas around vulnerability hangovers.

And after the Times article people started thanking me. They thanked me for being open. For being honest. For sharing my story. I realized they were thanking me for being vulnerable. And what J.D. Roth told me a year earlier finally clicked.

“The more vulnerable I am, the more successful I’ll be.”

You see, by trying to protect myself I’d actually been doing a disservice to me. To you. To us. And I don’t want to do that anymore. I want to help as many people as I can because there’s nothing better than getting random thank you notes.

“I want to say thanks for everything you’ve done as I’d have been another typical American otherwise. Even though I’m going slow for now due to my age, I have multiple savings/investing accounts being automated and when I get closer to retirement, I’m confident there’ll be plenty of money to live a nice life on.”

And that’s why I do what I do.

A few months ago I was thinking about killing this site. But then I realized it was because it made me feel like the Chris from four years ago that was hiding. So I didn’t need to kill this site, I needed to kill Mr. Everyday Dollar.

Last week I did it. I changed this site from Mr. Everyday Dollar to simply, Chris Reining.

And at first I thought changing it to my own name would make it all about me, and how narcissistic do I have to be to do that? But it’s not about me, it’s about growing as a person. That’s what it’s really about.