“Wall Street is the only place that people ride to in a Rolls Royce to get advice from those who take the subway.” –Warren Buffett

That quote is simply amazing because it highlights how ass backwards Wall Street actually is. Buffett is one smart dude, and as an investor it’s those bits of wisdom I always look forward to in the annual letter he pens to Berkshire Hathaway shareholders.

The good news is that even if you aren’t an investor in Berkshire Hathaway, even if you don’t know the difference between a stock and bond, you can sit down on a Sunday morning with a cup of coffee and read his 2013 letter right here. (And if you love it, you can read his letters every year back to 1977.) It’s time well-spent.

So here’s a guy at the helm of a company worth over $200B, and hidden in his 2013 letter is free investing advice. And he doesn’t take the subway to work, he takes private jets!

He explains the simple investment system that a “know-nothing” investor can follow, that will beat all the professional money managers. First, a little teaser from Buffett:

“I have good news for these non-professionals: The typical investor doesn’t need this skill. In aggregate, American business has done wonderfully over time and will continue to do so (though, most assuredly, in unpredictable fits and starts). In the 20th Century, the Dow Jones Industrials index advanced from 66 to 11,497, paying a rising stream of dividends to boot. The 21st Century will witness further gains, almost certain to be substantial. The goal of the non-professional should not be to pick winners – neither he nor his “helpers” can do that – but should rather be to own a cross-section of businesses that in aggregate are bound to do well. A low-cost S&P 500 index fund will achieve this goal.”


Buffett is basically saying that someone who doesn’t know a thing about investing can do well in the stock market because they’re just going to hitch themselves to this gravy train called America.

So what the hell does that mean?

It means you’re going to invest in an index fund that captures the whole market. You’re essentially betting on the prosperity of the U.S.

If we take a peek at the Dow Jones Industrial Average that he mentions – which is a benchmark of the stock market – we can visually see that over the last 100 years the general direction of the market is up: 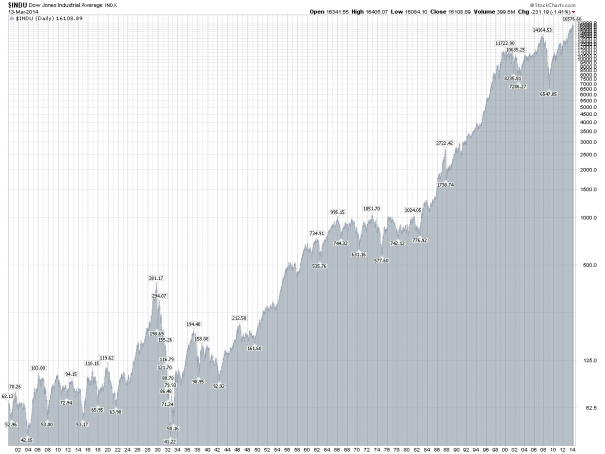 Yes, there will be the occasional financial crisis like we experienced with the Great Recession. In fact, there were 20 recessions in the 20th Century alone. These times can be scary as an investor, many folks watched their retirement portfolios lose 30 percent of their value.

But during recessions the worst thing you can do is pull your money out of the market.

I know, it’s hard. If you turned on your TV anytime during those recent stormy years, the talking heads on networks like CNBC had plenty of fear to spew about how the recession would never end, how the market would never recover, and crazy stuff like how you should be investing in gold and raccoon pelts instead of stocks.

This is short-term thinking, and is total crap. Buffett sheds more light on this:

“Late in 2009, amidst the gloom of the Great Recession, we agreed to buy BNSF, the largest purchase in Berkshire’s history. At the time, I called the transaction an “all-in wager on the economic future of the United States.” That kind of commitment was nothing new for us: We’ve been making similar wagers ever since Buffett Partnership Ltd. acquired control of Berkshire in 1965. For good reason, too. Charlie and I have always considered a “bet” on ever-rising U.S. prosperity to be very close to a sure thing. Indeed, who has ever benefited during the past 237 years by betting against America? If you compare our country’s present condition to that existing in 1776, you have to rub your eyes in wonder. And the dynamism embedded in our market economy will continue to work its magic. America’s best days lie ahead.”

Many people I talked to during the downturn thought that their retirement portfolios would never recover. I told them to do the same thing I was doing: Stay invested and continue to invest available cash into their portfolios.

Now, years later, the market is setting all time records, and their portfolios have soared to new highs.

The following are three investing mistakes Buffett outlines in his 2013 letter investors, that are easy to fix.

Mistake #1: Sitting out the bad times

“The main danger is that the timid or beginning investor will enter the market at a time of extreme exuberance and then become disillusioned when paper losses occur. (Remember the late Barton Biggs’ observation: “A bull market is like sex. It feels best just before it ends.”) The antidote to that kind of mistiming is for an investor to accumulate shares over a long period and never to sell when the news is bad and stocks are well off their highs. Following those rules, the “know-nothing” investor who both diversifies and keeps his costs minimal is virtually certain to get satisfactory results. Indeed, the unsophisticated investor who is realistic about his shortcomings is likely to obtain better long- term results than the knowledgeable professional who is blind to even a single weakness.”

Key takeaway: Keep investing through both good times and bad, and only invest money you don’t need in the next three to five years. You’ll end up with an amazing retirement portfolio.

Mistake #2: Lining the pockets of others

“Nevertheless, both individuals and institutions will constantly be urged to be active by those who profit from giving advice or effecting transactions. The resulting frictional costs can be huge and, for investors in aggregate, devoid of benefit. So ignore the chatter, keep your costs minimal, and invest in stocks as you would in a farm.”

Mistake #3: Having a complex portfolio

“My money, I should add, is where my mouth is: What I advise here is essentially identical to certain instructions I’ve laid out in my will. One bequest provides that cash will be delivered to a trustee for my wife’s benefit. (I have to use cash for individual bequests, because all of my Berkshire shares will be fully distributed to certain philanthropic organizations over the ten years following the closing of my estate.) My advice to the trustee could not be more simple: Put 10% of the cash in short-term government bonds and 90% in a very low-cost S&P 500 index fund. (I suggest Vanguard’s.) I believe the trust’s long-term results from this policy will be superior to those attained by most investors – whether pension funds, institutions or individuals – who employ high-fee managers.”

Key takeaway: Less really is more when it comes to investing. A portfolio which is 90% in a Vanguard index fund (for growth), and 10% in bonds (for safety), is all you really need.