Those who cannot remember the past are condemned to repeat it. – George Santayana, from Reason In Common Sense

A classic example of the aforementioned quote is Hitler’s invasion of Russia. Napoleon had done it once and Hitler made the same mistake, suffering the same fate. On both occasions, the Russians simply retreated drawing the enemy further and further into Russia in their advance, and then when the Russian winter struck and the invaders found themselves unprepared and ill-equipped to deal with it, they were killed in their thousands during their retreat.

I used to hate history. I always thought, “Why should I study and care about all these things that happened a long time ago? I’m only going to care about what’s happening now and in the future. That’s what’s important!”

I was naive, because there is so much that has happened before that we can learn from. I like to use this information to quell my fears about my stock portfolio and to drive portfolio management decisions.

But first, let’s have a brief re-cap of two of my favorite financial events that back up Santayana’s claim.

Often considered the first speculative bubble, tulip mania reached it’s peak when prices for tulip bulbs in the Netherlands skyrocketed to a point where a single bulb sold for 10 times the yearly salary of a skilled craftsman.

The tulip made it’s first appearance in Europe in 1554 and was unlike any other flower in Europe at the time. The wealthy built their gardens around the tulip and as a result it became a status symbol. 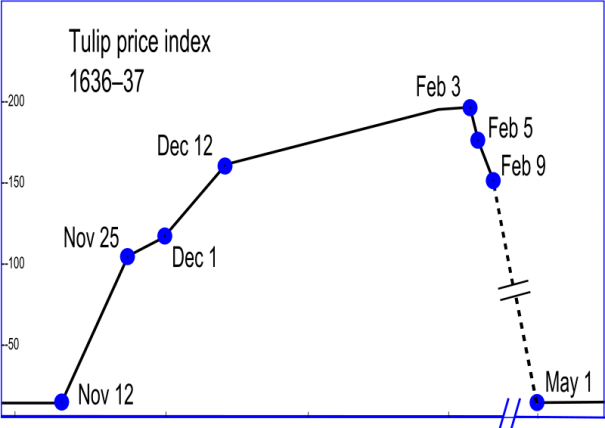 As the popularity of the tulip grew, growers began paying more and more for the bulbs and the prices followed suit. In one month alone, tulip prices increased twenty-fold.

Eventually, the Dutch created a sort of futures market where the rights to buy bulbs at the end of the season could be bought and sold. It reached a peak when traders who were buying bulbs hoping to sell them at an inflated price could no longer find buyers at the higher prices. Bulb contract prices collapsed and the whole market came to a screeching halt.

The Internet, first offered commercially in the late 1980’s, began rapidly expanding across the world in the early 1990’s. During that time, it’s been estimated traffic on the internet was growing by 100% per year.

This rise in usage sent investors into a tizzy over this new economy and venture capitalists began freely issuing start-up capital seemingly to any company with an “e-” prefix or “.com” suffix.

The stock prices of these dot-com companies soared and traditional valuation methods used by investors, such as the P/E ratio, were thrown out the window.

But by the year 2000, many of these dot-com startups were close to burning up all their cash without ever turning a profit. By 2001, some companies – like my favorite example Pets.com – failed completely.

Others lost a large portion of their market capitalization but still exist today, like Cisco and Amazon. Here’s Amazon:

Of course, there are many other bubbles and crashes like the Florida real estate craze in 1926 and the recent housing bubble of 2007. Santayana’s right.

What happened in all these situations?

There are generally two frames of thinking during these bubbles.

The first is: it’s different this time. For instance, while we watch housing prices skyrocket, a euphoria sets in and some people believe that prices will continue to skyrocket indefinitely. We all know the stories of a woman on a housekeeping salary buying a $400,000 house or flipping millions of dollars in real estate. We think we’re in a new world of infinitely increasing returns.

The second frame of thinking is: I’ll get out at the top. This is the investor who realizes that there is a bubble but they also believe they will ride the speculation to the absolute top and get out there with the largest return possible. As we know, there is no way to time a market; it’s a fools errand. If someone at a cocktail party sides up to you and tells you they can, ask them why they’re still working a 9-5.

These bubbles will happen. I feel the same euphoria right now with 3D printing. While it may be the next greatest thing, the next industrial revolution, I have been hesitant to invest in any 3D printing company. Tulips, the Internet in the late 1990’s, real estate in the early 2000’s – these bubbles all played out the same.

Where we are today

In 1981, when Mr. Everyday Dollar was two, the U.S. was in a deep recession with 11% unemployment and with 30 year mortgage rates at 18.5%. Budget deficits were high and the national debt skyrocketed. Investing in stocks was shunned but it turned out it was a great time to invest in them.

We just had a recent housing bubble, deep recession, and unemployment at 10%. I remember very few investors keeping their money in common stocks in 2007-2009, but it turned out to be a great time to buy.

Some of my best ever investment returns were because I stayed invested during the downturn and was regularly putting new money into common stocks.

We were told it’s different this time. But it turns out that the 1981 playbook proved to be successful in 2007. The market has since roared back and is poised to reach new highs as evident by the Dow and S&P indexes.

With all those seemingly overwhelming problems, the Dow rose from 256 to 995 by 1966, almost a 4-fold increase. The investors who ignored the fiscal problems were well rewarded by investing in common stocks, while those who pulled their money out and sat on the sidelines lost the potential of creating great wealth.