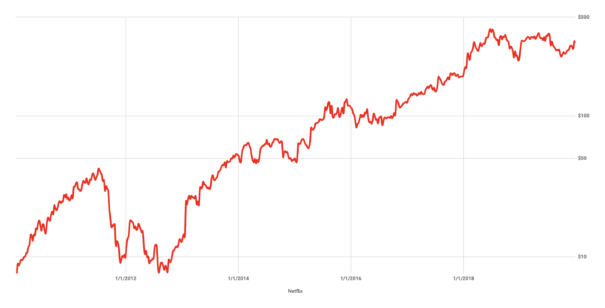 When someone claims to have amazing long-term stock gains you know what else they have? Losses.

Actually, it’s a common human trait. It’s been said the pain of loss is two times as powerful as the joy of gain.

In other words, a stock you bought that quickly rises 50% feels wonderful. You walk down the street with your chest puffed out. Your friends ask for investing tips. Your spouse thinks you’re brilliant.

But staring at a stock you bought that dropped 50%? Well, that feels terrible. Like you lost 100%. Everything.

I have no problem taking a 50% loss here and there. I experienced it during the financial crisis in 2008. I’ll experience it again.

Their adopted maxim is “don’t lose money,” but if you’re investing in great stocks, and expecting to hold onto them for many years, should the day-to-day or year-to-year price fluctuations even matter?

It’s easy to wish you bought Netflix in 2010, but would it have made a difference?

The stock has been a nightmare to own. It suffered five separate drops of 35% or more. Dropped more than 58% twice. More than 79% once.

Most investors can’t stomach those losses. They would have sold.

But volatility is the nature of the stock market. Whether you’re investing in stocks like Netflix or broad-market index funds you’re going to spend time losing money. Some days it’s a small amount. Others it’s huge. But it’s how you react to losing money that ultimately determines your gains.

Maybe a simplistic way to think about all this is to start with a $100 portfolio split between two stocks.

But investing has little to do with wiping out 50% losses with equal gains. It’s about building wealth.

But in reality, you still gained 26%. So who cares?

I know it’s hard to look at investing this way, that to gain money requires losing it, but that’s how small fortunes get built.

This was originally posted on Forbes in March 2020. Re-posting it here for a permanent archive.