However, even Mr. Everyday Dollar needs some help staying on track from time to time, and when I wanted to whip my body into shape I turned to one of my favorite comedians of all time: Jerry Seinfeld.

Now, what does Seinfeld have to do with losing my love handles?

It starts with an encounter that Brad Isaac, an inspiring comedian, had with Seinfeld at a comedy club. Isaac asked the legendary comic for any tips he could give to help him break into the business.

His Red X System is quite simple:

Seinfeld stated that after a few days you’ll have built a chain of X’s. The chain will get longer and longer and you won’t want to break it by not completing the task. Then your job becomes simple: don’t break the chain.

If such a simple system could propel Seinfeld to stardom I thought it would be fun to try for Shaun T’s Insanity, an intense 60-day workout program that I intended to start.

Aptly named, the workouts are cardio heavy – a variety of jumps, martial art moves, jumping jacks, burpees – along with resistance in the form of push-ups, squats and lunges, all done at a frantic pace. (The program also doesn’t involve any equipment, a big pro in my minimalist opinion.)

In the first week of starting the program, I found that there were already days that I didn’t want to queue up the workout because I was tired, either from a busy day at work or from after-work obligations.

But then I would glance over at my Insanity Red X System calendar, and the long chain of X’s would taunt me. 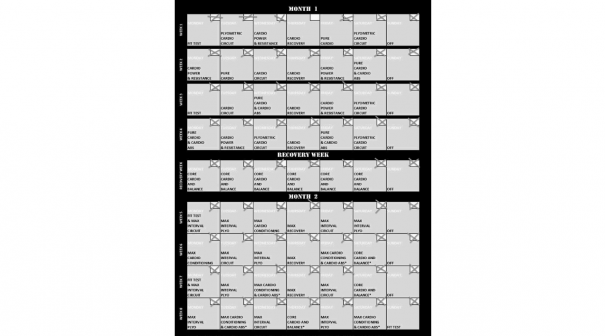 I finished the program – missing just one day during the first week – and got my body into great shape while I improved my rep numbers on “test” days:

It’s easy to miss a day early in the chain like I did, and that’s the one major flaw with the Red X System. It can be extremely powerful but only once a long chain has been established. By failing one day and then the next, you put yourself into a precarious situation where you may not be able to build the motivating chain.

It’s a slippery slope to tell yourself, “I’ll start the chain tomorrow,” so you may want to involve a friend or family member early in the process to help keep you accountable, until you have a solid chain built.

So if you’re like most people – feeling overwhelmed or frustrated that you aren’t reaching your goals or getting things done – you should try the Red X System. We all know how easy it is if we skip one day to skip the next, but using this system makes sure that we keep building a chain, thereby building the habits, that lead to our success.

It could be flossing your teeth, not going out to eat in order to save money, or putting $5/day into your emergency fund, start with a red X today!