If you have Netflix, because you cut the cord, you are in luck! The Queen of Versailles is a documentary now available to stream. It follows timeshare mogul and Westgate Resorts founder David Siegel and his wife Jackie as they set out to build the largest single-family house in the U.S. How large? A staggering 90,000 square feet.

The Siegels have dubbed this monstrosity Versailles, and true to its name, it’s modeled after the famous French chateau. David Seigel came up with the idea as he zoomed across the skies in his private jet, one of the perks of being a billionaire.

Standing at nearly seventy feet tall, the house sits on ten acres of lakefront property in Orlando, Florida. When completed it will have:

The Siegel kids, all eight of them, will have an entire wing just for themselves, complete with a living room, a computer center, and a movie theater. The adults will have a theater of their own, obviously.

The construction of such a residence would be interesting enough for me to watch, but what makes it awesomely fascinating is it happens smack dab in the middle of the financial crisis of 2008. Uh oh.

Westgate Resorts is faltering, Versailles goes into default and the family life of the Siegel clan becomes tumultuous. My thoughts on three of the real-life characters follow.

David is the grumpy and aging pioneer of the timeshare industry. Over the course of the film, as the recession deepens, he becomes more and more stressed with the failing operations of Westgate Resorts.

David is openly despondent when nobody is buying time shares anymore, therefore no money is coming in to pay his employees. He’s forced to lay off 7,000 employees and it hits close to home too, where he needs to fire the 15 housekeepers and five nannies.

Sadly, after the household help is gone, the Siegel dogs run around crapping all over the house with nobody to pick it up. A lizard dies because it’s not given food and water, a fish is seen floating at the top of a filthy aquarium, and one of their kids exclaims, “I didn’t know we even had a lizard.”

As David can’t seem to find a way out of the financial crisis he’s in, he openly admits to the camera that nothing makes him happy any more. Asked if he draws strength from his marriage, he flatly replies, “No.”

One of the most shocking revelations to me was that David didn’t have any money saved. Even we know better! (You do have that emergency fund, right?)

And like some of us, the once billionaire Siegels begin living paycheck to paycheck. David stresses to only spend the money they have now, not the money that they might have in the future.

And just like my frugal father used to, David begins yelling at the kids to turn off the lights in the rooms they aren’t in, to save money. A true riches to rags story. 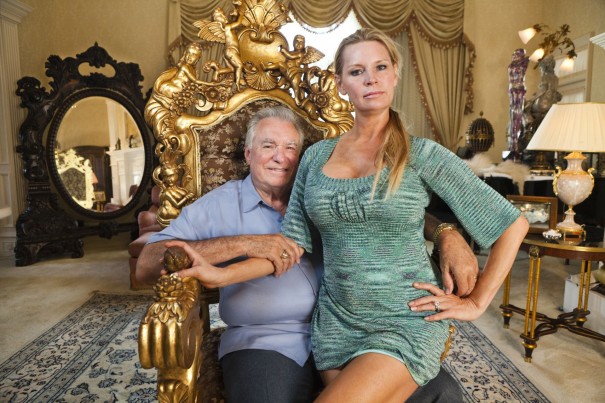 Jackie drew me in. She is easily caricatured much like the Real Housewives stars: she has giant fake breasts, obsessively shops and never lifts a finger (yes, she did take a limo to McDonald’s). But we come to find she is seemingly well-meaning but with a warped sense of “enough”, as shown by her need to purchase three identical copies of the board game Operation during one shopping spree. Really?

Bringing the days haul back to the house, we’re led through the garage finding it stuffed with what looks like a hundred children’s bicycles. Jaw-dropping consumerism at its best.

This over-consumption even bled into the bedroom! She has eight kids with David, one adopted, and said “I never would have had so many children if I couldn’t have a nanny.”

By all means, Jackie appears to be an intelligent woman. She has a computer engineering degree and worked for IBM before she decided to escape the cube lifestyle. She turned to modeling, and after one marriage that ended in divorce, she met David. He was 60 at the time, 30 years older than her.

By marrying a billionaire, Jackie definitely climbed the social ladder, but unfortunately became an oblivious trophy wife: at one point in the movie, as she visits the construction site of Versailles, she’s told by the director that the house is in foreclosure, a complete shock to her.

As the families financial life falls apart around them, she begins to have a little insight into what is really important in life; she realizes their current 27,000 square foot house (!) is perfectly fine and chooses to fly commercial to save money. Perhaps a little Mr. Everyday Dollar was rubbing off on her!

One of the most telling scenes of her bloated lifestyle is when the cameras follow her on a trip to Binghampton, New York to visit the neighborhood where she grew up. After getting off the airplane she and her children find themselves at a Hertz Rent-a-Car counter. After explaining to the clerk that flying commercial was strange (one of her kids on the flight says, “What are all these other people doing on our plane?”) she asks him for the name of her driver! The clerk stares at her, stunned. 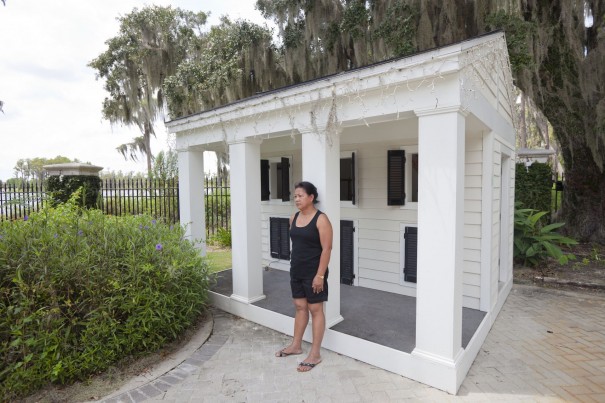 One of my favorite subjects is Nanny Virginia Nebab, who is shown above standing by a playhouse which is now her “house”. The playhouse was used by the youngest of David and Jackie children, twins Jordan and Jacqueline. After outgrowing it Virginia asked if she could live in it.

She tells the camera, “This is my palace. I love this place and I’m so glad Jackie gave it to me.”

She originally emigrated from the Philippines by way of Dubai and has been the Siegel family nanny for 11 years. While she dotes on their children, she hasn’t seen her own children in 19 years.

Virginia owns land in the Philippines, where she had hoped to someday return to build her own house to fulfill her father’s dream of living in a concrete dwelling. Sadly, he dies before she can return, leaving her to reflect that at least he was buried in a concrete tomb.

I found the stark contrast between the lives of the Siegels and Virginia to be one of the best parts of the movie. While the design of Versailles is a monument to bad taste, like the hilariously tacky portraits that litter the house (e.g., Jackie as a Greek goddess and David as a Roman warrior), Virginia wanted a concrete dwelling as a monument to her father. And to think, Versailles mahogany doors and windows alone cost $4 million.