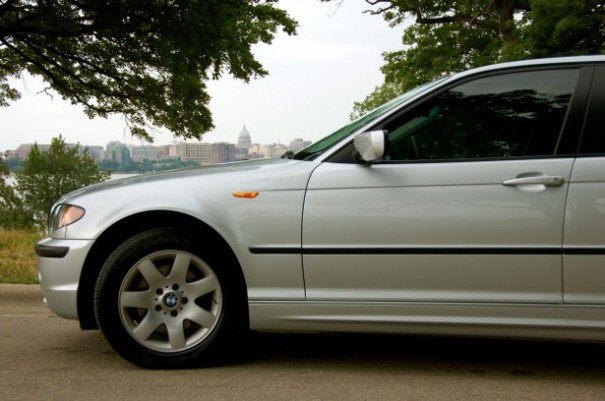 Yes, Mr. Everyday Dollar owns a fancy pants foreign luxury car. In all fairness he did buy it used. In fact he has never and will never buy a new car. You are probably saying “Okay, even though it was used that is so very un-Mr. Everyday Dollar-ish”, and rightfully so. First off, he bought this car 4 years ago when he wasn’t completely dedicated to becoming financially independent. If he had to buy a car today he would first think long and hard about if he could get by using public transportation – in his case the city bus system – in addition to the bicycle, and the Mr. Everyday Dollar legs. Then if he decided he did need a car he would buy a safe, reliable, high MPG vehicle that could be purchased with cash. Preferably around $5,000-$10,000 and preferably from Craigslist where he has better bargaining power.

The reasons why I plan to keep this car and not sell it:

* According to Edmund’s True Market Value selling my current car as a private party would net me $11,000 which is around the most I would spend on a car today.

Recently, Mr. Everyday Dollar, in taking care of the things he owns, took his car in to the BMW dealership to get an oil change because it was due for one plus there was a recall notice that he wanted to get taken care of. While sitting in the huge waiting room with floor to ceiling glass while sipping free coffee, eating free bananas, and drinking free bottled water he started to think about all the costs they must incur to run the place. Sitting amongst the gleaming new models of BMWs he realized that they are targeting affluent people who probably are not the Mr. Everyday Dollar type. He was able to witness a few interactions between the service people and customers. One went like this:

Customer: “…and what else are you guys doing today?”
Service Guy: “changing the microfilter.”
Customer: “okay, sounds great!”

Now, I don’t know if that guy knows what a microfilter is but I knew that it was a $15 part that takes literally 2 minutes to install and 1 minute is simply popping the hood. And this guy was going to pay $75 for it. Somebody has to pay for all the coffee I’m drinking and the taxis they shuffle customers around in.

Service Guy eventually comes over to me and tells me my car is done, with a free car wash to boot.  Here’s what they did:

Cool, all set. But wait, I have some other preventative maintenance I want to perform on my car as I’m nearing 100,000 miles so I ask my Service Guy for a quote for the work. Here’s the breakdown he gives me:

Now, Mr. Everyday Dollar is not against doing work on his car. In fact, I just recently changed the belts. But changing fluids I don’t like to mess with for now. So I called 3 well respected local independent shops that work on foreign cars to get quotes from them for the same work. They were all in roughly the same ballpark price-wise and I also asked them if they would install parts that I bring in, which they were fine with that; they would charge me labor only. Very Mr. Everyday Dollar. I researched the parts that they would need and the quantities and ordered all of it to be delivered to my front door. In addition this also gave me control over the brands and quality of parts used which is good because I like to use quality parts, not cheap but not fancy, I like the middle ground.

Here’s the breakdown of the parts/labor cost doing this Mr. Everyday Dollar style:

* these items were misquoted by the shop so they became no charge, otherwise it would have been around $300

That’s a lot of free coffee and bananas I would have been buying for the dealership!

I did do some maintenance myself. I’m not sure how much a shop would have charged for these things but it wouldn’t have been free. The things I did and got the self-satisfaction of getting my hands greasy:

The only thing I have to tackle now are some small rust spots in the door sills before they become a bigger issue. Maybe I will have the dealer quote that for me!