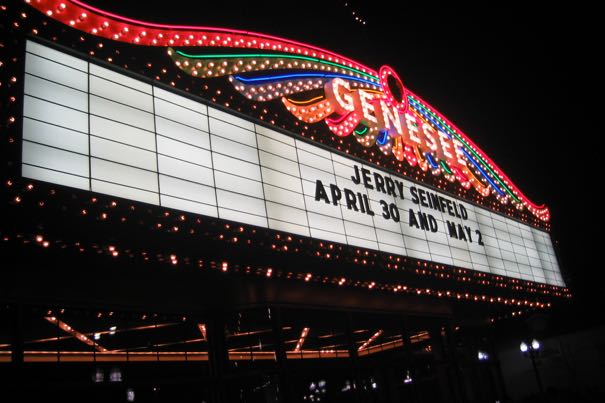 I saw Jerry Seinfeld do stand-up comedy once. And then I read that James Altucher watches stand-up clips before giving a talk because it makes him feel loose and relaxed.

I thought that was a good idea so I started doing the same thing before giving a talk, or going on TV, or interviewing for a job. Really whenever I was about to do something that I felt nervous about doing. It works extremely well.

Like I’ll watch this Louis C.K. bit about how everything’s amazing and nobody’s happy. That’s what I watched right before the last job interview I did. But I also did one other thing that I should have been doing all along.

But that’s okay because we can fix it. And really the only thing you need to know is that a resume is a list of your achievements, not a list of your responsibilities. Once you rewrite your resume this way it’s like being able to cheat in the interview without anyone knowing you’re cheating.

How do you do this? Here, I’m going to show you.

1. Rewrite your resume so it’s a list of your achievements

Your resume might be pages of stuff like, “Responsible for blah blah blah.” Okay, no one really cares about what you were responsible for because everyone knows you had day-to-day responsibilities.

What the hiring manager wants to know is if you’re the type of person who has the ability to make things better. The way you can show them you’re that type of person is by listing your achievements and the results.

Here’s an example from my resume:

“Replaced the proxy infrastructure with an open source solution, saving $50,000.”

Now, you don’t even have to know what that means to see I achieved something and it had some quantifiable result.

When you’re rewriting your resume this way and you don’t know exactly what the quantifiable result is then it’s okay to make a logical guess like “increasing sales X%” or “improving delivery performance by X days”.

And before someone tells me I’m telling you to lie on your resume you’re not lying here, you’re making a logical guess. Erring on the safe side, of course.

How many achievements should you have? Not many. For each job you should list from one to three. For older less relevant jobs one is fine. For newer jobs up to three.

And yes, rewriting your resume this way so it’s a list of achievements will cut it way down. My resume went from three pages to one page, and that was with 15 years of experience.

If you’re still thinking a longer resume makes you look more impressive you should know that recruiters don’t care because studies show they spend about six seconds on it.

2. Make each achievement a story

Now that you rewrote your resume so it’s a list of your achievements, you need to have a story for each one. And like any story, they should have a beginning, a middle, and an end.

The beginning is the problem or challenge you faced, the middle is what you did to solve that problem, and the end is what result you achieved, and what you learned.

Take some time to come up with these stories. Better yet, write them down so you can make sure they all follow that story arc, and are compelling.

You’re writing stories so that when the hiring manager is asking you, “What are your strengths?” you aren’t just rambling on about a bunch of generic stuff like how you work hard and you’re motivated.

No, you’re going to have a story about how you encountered a problem, how you took action using one of your strengths, and how it turned out.

You’re doing this because when you tell stories they’re going to remember you because people connect with stories. And what you’re really doing is selling yourself as the best candidate because you’re sneaking in one of your achievements, too.

3. Pick a story and get the job

In my 20s I was terrible at interviewing because I was never prepared. Every interview I went to I’d struggle trying to think of something on the fly when they asked me, “Can you tell me a time when…”

This is kind of like how I used to think comedians like Jerry Seinfeld and Louis C.K. just walked on stage and told jokes. I didn’t know they were doing a meticulously crafted and rehearsed routine. (The excellent documentary Comedian has a behind-the-scenes look at this.)

So, if you want the job, you need to have a meticulously crafted and rehearsed routine just like a comedian does. You do this by bringing a printed copy of your resume to the interview, and you put it down on the table right in front of you.

Then when they ask you, “Can you tell me a time when…” you’re going to look down your list of achievements, pick the one that best fits their question, and simply tell your story. You won’t believe how easy and effortless interviewing is when you do it this way.

Sure, they might ask you a question you don’t have a story for. But if you rewrite your resume this way you can spend 80% of the interview telling your stories and 20% improvising.

And when you’re telling stories off your resume you’re going to beat all the other candidates who are fumbling their way through the interview. That makes you the best candidate, and the most likely to get the job.