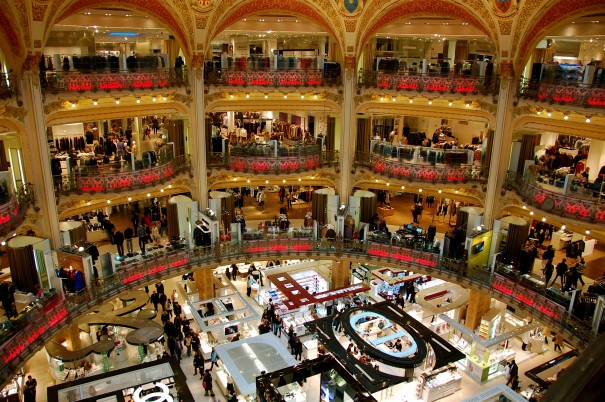 My last post on the Third World perspective of the U.S. pointed out how Westerners tend to be material, not spiritual. We care more about what stuff we want to buy than the collective well-being of our society.

That got me thinking about why is it that we choose to live beyond our means, opt for crazy commutes to work, love gas guzzling SUVs, finance new stuff we can’t pay cash for, stuff our faces with fast food and pay people to clean our houses, mow our lawns, shovel our driveways, fix our leaky faucets and maintain our cars?

Does it start with our parents? I tend to think they have a pretty good hand in shaping behaviors that stick with us for a lifetime. Therefore, one thing I want to make absolutely sure I do is avoid raising my future Everyday Dollar kids to be spoiled conspicuous consumers that don’t know how to do anything themselves.

I was recently reading about a tribe called the Matsigenka who live in the Amazon in Peru. They, like the Sudanese men, do not have Western luxuries. They hunt for monkeys and parrots, they grow yucca and bananas and they live in houses they roof with palm tree leaves.

However, the kids of the Matsigenka quickly find things to make themselves useful. They will sweep off the sleeping mats, they will stack the palm tree leaves to take back to the village for new roofs, they will fish for food and will will also clean, boil and serve it to the rest of the tribe. How old are these kids you might ask? Try 6 years old.

Why is it that in the U.S., kids don’t perform chores without being instructed? Why don’t kids make themselves useful like the kids of the Matsigenka tribe? Why aren’t parents developing and instilling responsibility? Why do I see parents having to beg, coerce, bribe, even pay their kids to do a simple task in the home? And how typical is it that even after all those tactics, the kid still refuses and the parent ends up doing the task?

I remember being at the home of one of my first girlfriends. We were in the media room watching a LaserDisc movie. Remember those? For you younger folks, it was a short-lived media format. Picture a CD the size of a record and you’ll have the right idea. She came from a well-to-do family so they always had fancy new stuff like that. So there we were, watching a LaserDisc, and she wanted a soda. So she yelled to her mom, “Mom! Mom! Bring me a soda!” Shockingly, a few minutes later her mom showed up with a soda and a tall glass filled with ice. I was floored! I had never seen a teen and parent interact like that and would never expect that from one of my parents. My mom would have either ignored me or yelled, “You have two legs, get it yourself!”

How does Mr. Everyday Dollar think we can start reversing the trend of consumption and spoiled kids we’ve set? I think there’s three things we can start doing today.

I think parents are spoiling their kids more than ever. The house is cluttered with toys, clothes, televisions, game systems, sports equipment, DVDs, and cell phones. The U.S. consumes 40% of the world’s toys even though we only have 3% of the kids! That’s downright sickening. Get rid of the TVs which rids the home of the bulk of advertising, stop taking your kids to McDonalds and eat at home, stop the never-ending gift-giving for birthdays, Christmas, and “just because”; basically ratchet back consuming as far as possible!

I say ignore your kids, they’ll figure it out. While that might sound harsh, don’t worry that you’re going to damage your kid by frustrating them. Kids will actually be damaged if they can’t cope with frustration.

Wait 5 minutes before you tend to your crying infant. Don’t baby your babies. Yes, your kids have basic needs and as a parent you should be meeting those needs. But, kids also need to understand that the world doesn’t revolve around them. There are other people in the world, also with needs, and a lot of them – like the Sudanese boys – don’t even have food and potable water.

Don’t teach your kids that instant gratification is the norm and they won’t grow up to be an adult that chooses to blow their paychecks on the latest and greatest gadgets and cars.

By encouraging kids to be useful around the house it will foster the skills necessary to survive. This in turn build confidence and will allow the kid to take on more complex tasks. Which in turn builds confidence. It’s a beautiful cycle that will continue into adulthood.

I value hard work, discipline and self-sufficiency. Ironic that these are the tenets of financial independence. And I value those character traits because it was the way I was raised.

It’s what I want to instill in my children by having them want to be useful around the house. They will want to help till the garden or make homemade apple sauce or paint the house or build a chicken coop in the backyard. Because it’s fun! Part of that will be that my home won’t be jam-packed with so much clutter and toys to distract them. The way I live will be representative of the values I want to convey to my kids.

What values are conveyed from parents who are driving brand new Escalades, eating out daily, buying trendy clothes, guzzling Starbucks, going on fancy European vacations and cluttering their homes with massive amounts of stuff?

What do you feel are the important skills or lessons to teach children to be able to cope in the consumer world we live in?