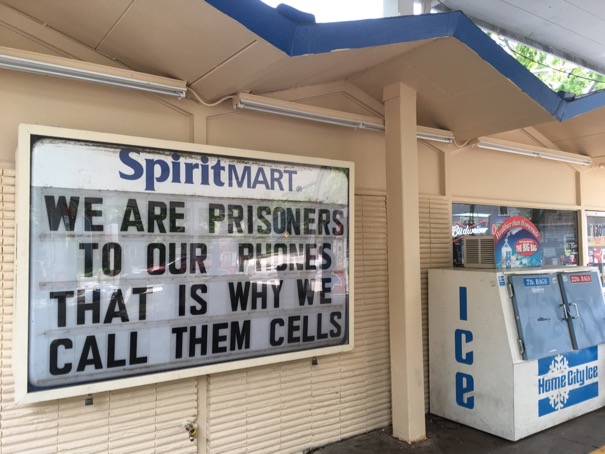 Okay, I’ll tell you why. After I get a new iPhone the first thing I do after taking it out of the box is flip the little switch to put it on silent. It’s been on silent ever since.

That means I don’t know you messaged me until I check my phone, and sometimes a whole day can go by before that happens. Here’s how a recent conversation went with my sister.

“Going to Dells Tuesday til Wednesday. Lmk if you’re in.”

It drives people crazy, but it gets worse. The second thing I do is delete as many apps Apple lets me delete, which means I don’t have Facebook or Twitter or anything like that on my phone.

So that’s why I’m bad at social media.

I read comedian Aziz Ansari recently did the same thing — unplugged from Twitter and Instagram and email.

In an interview with GQ he says instead of “looking at websites for an hour and half, checking to see if there’s a new thing,” he uses the time to be more productive by reading books.

If you really stop and think about this, how many hours do you spend checking news, video binging, shopping, playing games, messaging, or doing “hamster pellet checks” on social media?

I’ll tell you. Studies show it’s between 1.5 and 3 hours a day. And that’s just while you’re at work and you’re supposed to be working.

What if instead you used those 15 hours a week at work to actually work on your career? I’m not talking about working harder because you don’t need to work any harder.

In my 20s I used to think if I was the hardest worker my manager would see that and promote me. It took me years to understand that nobody cares if you’re working hard.

Really? What matters then?

And before you tell me that playing the game means you have to become some slimy weasel that walks around the office brown-nosing higher-ups it’s not about that at all.

It’s about adding value, and here are the steps to do it.

1. Start spending time with people you want to be like

Jim Rohn said you’re the average of the five people you spend the most time with.

Why is this critical?

Because when you spend your time with the same people you always spend time with they’ll want you to be the same person you’ve always been. You won’t get ahead because of crab mentality.

You get promoted because you’re adding value, so think about the ways you’ve already done this. Get out a sheet of paper and start a list:

You might think your list isn’t impressive, but I’m going to tell you it’s impressive and you don’t realize that because you can’t see it.

Now that you have a list of how you’ve added value, you need to focus on adding more.

3. Plant the “promotion seed” in your manager’s mind

The biggest mistake you can make when asking your manager for a promotion is to bring it up in a random meeting. Trust me, I did that once and it totally backfired.

Instead, plant the “promotion seed”. The best way to do this is by meeting with them about six months before you make the ask. You can start the conversation something like this:

“I want to be one of your top performers. Can you tell me what you think I need to do to be one, both in responsibility and compensation?”

They might say what they’re programmed to say and tell you to be a leader, be proactive, take on more responsibility, blah blah blah blah.

You don’t want that — you need things you can measure. Say:

“Okay, that really helps. But I want to make sure I’m working towards those things, so can you help me quantify two or three of them?”

Here are some examples of metrics:

Now that you know what metrics you’re working towards, it’s time to do the work. This should be fun!

Something like reducing costs or increasing sales is easy to work towards because you can measure it. But what if you end up with a “soft skill” — like improving communication skills?

Here, I’ll give you an example of what I did.

I picked up the book How to Win Friends and Influence People, and then I joined the local Toastmasters club and started giving talks there.

When I mentioned this to one of my mentors — this goes back to spending time with people you want to be like — he gave me the idea to start doing talks at work.

So I sent an email to each senior manager and pitched them an idea to come in and talk to their staff for 20 minutes.

Notice this wasn’t about me at all, it was about adding value to them. Managers are always looking to fill their agendas, and here I was offering to teach their staff about something they wanted to know more about.

I ended up giving four talks to staffs of about 50 people, and that’s how I could quantify improving a soft skill.

Okay. It’s six months later and you’ve delivered on all your metrics.

Set up another meeting with your manager. You can open it like this:

“I’m excited to talk to you today because six months ago we talked about how I can add more value, and changing responsibilities and compensation.”

Spend a few minutes talking through what you did in order to deliver on your metrics, and then talk about two or three things you’re planning to do next. You want them to know you’re going to keep adding value.

Finally, it’s time to ask for a promotion:

“I’d also like to discuss taking on more responsibility and compensation. Based on my research (use PayScale or Salary.com), for someone doing similar work with similar experience I should be making $75,000.”

Wait for them to respond. They will either agree or push back. And here’s what you do if they push back:

“There’s just no money in the budget to promote you, and you’re already in the middle of the salary range for your position.”