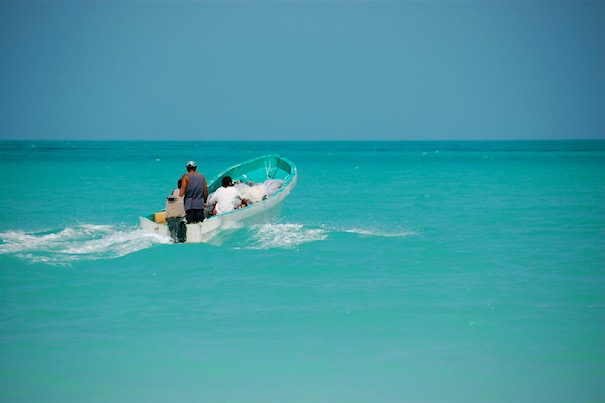 Holbox is a tiny island in the Gulf of Mexico.

I was there on holiday in 2009 and liked it so much I returned ten years later, but discovered the sleepy fishing village had transformed into a packed tourist trap.

At dinner one night I overheard a guy complaining how congested the island had become. “This is our second time here, but last year there weren’t many tourists. It’s completely changed!”

That got me thinking about perspective. Me and this other guy were both looking at the same thing, but from wildly different perspectives.

An American investment banker was at the pier of a small coastal Mexican village when a small boat with one fisherman docked.

Inside the boat were several yellowfin tuna. The American complimented the Mexican on the quality of his fish and asked how long it took to catch them.

“Only a little while.”

“Why didn’t you stay out longer and catch more fish?”

“This is enough to support my family’s needs.”

“But what do you do with the rest of your time?”

“I sleep late, play with my children, take siestas with my wife, and stroll to the village each evening where I sip wine and play guitar with my amigos. I have a full and busy life.”

“Well I have an MBA from Harvard and can help you.”

“You should spend more time fishing, and with the money buy a bigger boat. With a bigger boat you can make more money, and now you buy several boats, and eventually have a fleet. Instead of selling your fish to a middleman, you sell directly to the processor, and eventually open up your own cannery. You control the product, processing, and distribution. Of course, you leave this small village and move to Mexico City, then LA, and eventually New York City, where you run your company.”

“How long will all this take?”

“That’s the best part. When the time is right, you take the company public and become very, very rich.”

“Then you can retire. You move to a small coastal village where you sleep late, fish a little, play with your children, take siestas with your wife, and stroll to the village in the evenings where you sip wine and play guitar with your amigos.”

True joy comes from knowing what’s enough, and that you don’t need more. That more won’t make you happier.

Don’t believe me? Take these four guys. They make anywhere from $7 per hour to $1 million a year. Here’s how they responded when asked how happy they were on any given day, on a scale from one to ten:

It’s easy to think having more money or stuff or status will make you happier, but life is usually good. It’s a seven.

In fact, one of the first things psychologists did when they started studying happiness was a similar experiment. They took people and gave them beepers and whenever the beeper went off each person was to stop what they were doing — eating lunch, watching TV, working, whatever — and write two things:

They collected thousands of responses from hundreds of people and what they discovered wasn’t very surprising at all: pretty much everyone was writing seven all the time.

Sure, bad things happened and people got upset and the score would dip to the two-to-five range, but eventually it bounced back to seven.

It cuts the other way too. When super exciting things happened the rating would rise, but then settle back down to seven.

Life is usually good, a seven.

The problem is people get tripped up thinking if only they could have a little bit more they’d reach a permanent ten.

What I noticed was the brain has this nasty habit of always finding other things it wants, and these wants keep getting pushed higher as soon as you reach a lower level. It didn’t take long before I was plotting how to buy a mansion and Italian car.

Whenever you get what you want you’ll want something else. It’s rare to be satisfied with things as they are for long.

So now when I get that icky craving for more I remind myself there’s food in the refrigerator, clothes in the dresser, a house to live in, and money in the bank. Life’s good. A seven.

It’s all just a shift in perspective, knowing what’s enough, and that you already have it. Just like that Mexican fisherman.