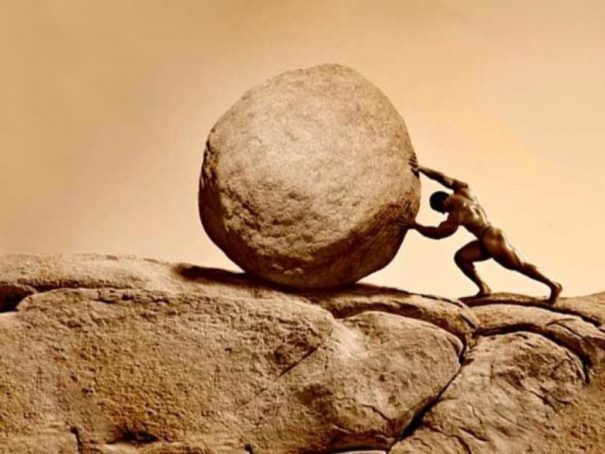 A friend called me up scared. They’ve spent the past 20 years working to pay off student loans, buy a house, raise a family, and so saving for retirement wasn’t a priority. “Where do I start?”

It was a good reminder: it’s easy to forget how confusing and daunting investing is when you’re getting started. Which reminds me of a story about a guy who had $100,000 to invest.

The first thing he did was buy 20 stocks, putting $5,000 into each. But then he thought he should be making more money and sold those shares to buy Chinese companies.

As he learned more about the market he discovered options and started buying calls, putting $5,000 in and making double that in a day. His gains eventually evaporated, easy money never lasts.

Then he decided to build a concentrated portfolio of growth stocks, and put his entire $100,000 into Square at $75. The stock price quickly soared to $100 and he was daydreaming about early retirement, but it wasn’t long before it fell back to $75.

Next, he read the best way to make money in the current market was to trade the volatility, and so he started day trading his $100,000. He spent hours glued to his laptop screen, sitting there refreshing trades for the millionth time.

After all this time and effort, can you guess his return? Down $8,000, including $3,000 in fees. The point is, you can make more money investing and work less at it if you simply buy and hold. That’s one of the biggest keys to investing and here’s two more.

New investors don’t think this way. They pull up a stock chart, buy a “price”, and hope their price goes up. The reality is stocks are a piece of a business. Even when you’re indexing, that’s what your fund is, pieces of businesses.

For instance, burrito chain Chipotle had a rough 2017. They faced a string of virus outbreaks, their new queso was called “a crime against cheese”, and rats were allegedly falling from ceilings. The best companies in the world aren’t immune to problems.

The stock price fell from $750 to $250 and if you were investing in prices you’d probably sell, but a seasoned investor thinks like a business owner. After all, that’s what shareholders are, part owner of the business. They ask themselves: “Are these short-term fixable problems? Do I have confidence in management? Is my money invested the best way it can be, going forward?”

Maybe it’s time to sell the stock, maybe not. Some investors sold Chipotle at $250, but on the other side of that trade were buyers who saw an opportunity to own a wonderful business at a fair price. Within six months Chipotle shares had doubled to $500, a 100% gain.

Jeff Bezos once said about Amazon, “The stock is not the company and the company is not the stock.” What he’s saying is in the short term the price of a stock is often disconnected from the company, but in the long term it always connects. It has to.

2. Great wealth is built with patience

It’s very hard to think long term, but thinking long term will make you a better investor, to have better returns. And that’s how you build great wealth. Jeremy Siegel calculated the returns of various assets since the 1800’s:

So investing in stocks is one of those things where you can’t afford not to do it, but you also can’t afford to make big mistakes. And the biggest mistake I see new investors making is thinking day to day, constantly tinkering and tweaking their investments.

All the research shows being an active investor is what makes you poor. Therefore, the cosmic secret to building wealth is patience. Warren Buffett said it best, “Only buy something that you’d be perfectly happy to hold if the market shut down for 10 years.”

Sure, I’m not immune from wasting time dissecting financial minutiae, but when you remind yourself to ignore all the nonsense — forecasts, market chatter, price targets — investing becomes simple, almost easy.

And isn’t that what you want. To make the most money investing, in order to support you and your family, without doing any work?

It’s unfortunate when new investors don’t have a good experience. You seem them pull their money from the market, vowing to never invest again. “Yeah, Wall Street is just a casino.”

The truth is, the market is one of the best ways to build wealth, but only if you buy companies and have tremendous patience.

This was originally posted on Forbes in July 2019. Re-posting it here for a permanent archive.