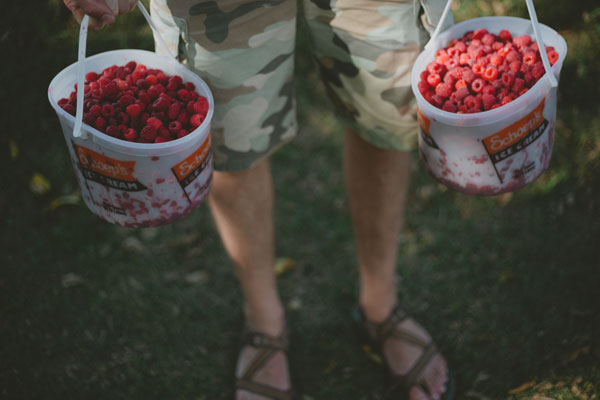 At this point everyone has heard of “eating locally.” So what does it actually mean to eat locally, what are the benefits, and how can you do it Mr. Everyday Dollar style? I’m here to give you this information!

The term eating locally is usually based on “food miles” (and take-out from the Indian restaurant down the street doesn’t count).

The food cooperative – where I shop the bulk aisle – defines it as food that is sourced “within 150 miles of the city or anywhere in the state of Wisconsin.” The government definition is that “the total distance that the product is transported is less than 400 miles.”

Semantics aside, the whole movement can be attributed to Gary Nabhan, whose 2002 book Coming Home to Eat

details how he ate only food that was grown within 250 miles of his Arizona home for an entire year.

Then, in 2005, Nabhan’s book inspired a group of women in San Francisco to try eating from within a hundred-mile radius of their homes for a month. This became the first “eat local challenge”, and the San Francisco Chronicle published an article about them.

Shortly after, writer Barbara Kingsolver moved from Arizona to Appalachia to begin living the life of a locavore with her family. She wrote about the experience in the 2007 book Animal, Vegetable, Miracle

. Nabhan had started a food revolution!

To me, it’s concerning to think that most of us live our lives disconnected from the source of our food. We mindlessly rely on a distribution system that can get us anything at any time. While I admit it’s logistically amazing that I can buy a fresh mango in the dead of a Wisconsin winter, there are reasons why that’s not necessarily a good thing.

How to eat locally and cheaply

There’s an assumption that eating locally is expensive. It certainly can be if you fork over $20 for a local organic chicken. But there’s a simple system that will allow you to eat locally and cheaply: Buy at the peak of the season, buy in bulk, and preserve.

This is the appropriate time to buy in bulk.  U-Pick farms are a great option, find one near you. At  farmer’s markets, vendors – often growing seasonal products – will find themselves with a large surplus which they’re sometimes willing to discount when you buy large quantities.

Preservation can be accomplished using different methods. There’s canning, dehydration, pickling, even making jams and jellies. Here’s a tip – the quickest, easiest, and most economical method is freezing because there’s no startup costs besides freezer bags or containers.

That is the system to eat locally and cheaply. Let’s face it, it’s too expensive to be a true locavore and consume only food sourced within a few hundred miles. Considering all of the benefits above it is, however, beneficial for our environment, communities, and our bodies to become pseudo-locavores.

When you’re at the farmer’s market, or trying to offload zucchini from your overgrown garden, or struggling to use your CSA box, remember that most produce is easily frozen.

Below are some popular spring produce with links to freezing instructions (anything not listed is a Google search away):

From late summer into fall it’s the season for:

The most exciting time is winter, when you open up the freezer and pull out local produce that you prepared just for this time. It doesn’t get much more satisfying than that my friends.