I’m driving to the office of an accountant because I need some advice about taxes and this guy was recommended to me. After I walk in his secretary says he’s ready to see me. The office walls are 1970s style wood paneling so I know he’s legit. He doesn’t waste money remodeling.

Once we move past formalities he asks me what I need help with. I tell him I’m anxious about taxes because eventually I’ll start drawing down my early retirement account and I don’t have a plan in place for that. And I get neurotic when I don’t have plans in place.

He asks me what I’m talking about and I explain how I’m financially independent. I don’t think he believed me.

So I talk numbers, the theory of the 4% safe withdrawal rate, and how my pals like Brandon, Jim, Pete, and Todd are early retirees, or at least don’t have to work.

It felt like I had violated his profession and he starts lecturing me on how I need to be concerned about inflation, and housing costs, and recessions, and if I have kids where their college tuition will come from. And then he tries to sell me on his financial services.

I’ve learned that if you want to reach financial independence fast there are two great options: Inherit money from someone wealthy or become a Bay Area tech entrepreneur and have Facebook or Google buy your startup.

But most of us aren’t going to reach financial independence either of those ways. The good news is there’s a third option which is fairly simple: Be mostly frugal and make as much money as you possibly can. Because how frugal you are has a direct impact on how fast you can retire: 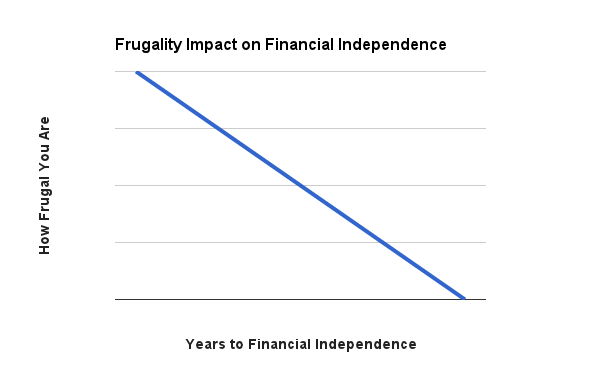 No one wants to be frugal. But being frugal only sucks when you listen to the cost-cutting advice from experts who say you need to clip coupons to save 25 cents on aluminum foil.

Or you should switch to re-usable cloth toilet paper you make out of your old t-shirts (wtf?). Or that you shouldn’t turn on your air conditioning even though it’s 95 degrees out. And of course you should never ever buy a $5 latte.

But who really wants that life? I don’t think depriving yourself is a part of personal finance.

And then there’s the experts who say you shouldn’t care about buying $5 lattes three times a day because it doesn’t really matter all that much. That your  focus should be on making more money.

While I agree that maximizing your income is critical to building wealth, I’d argue most of us reach an income plateau no matter how much time, money, and effort we spend grabbing for the next rung on the career ladder.

Instead, think about landing somewhere in the middle. Go after the big wins:

It took me 13 years to reach financial independence. Sure, I could’ve done it faster if I clipped coupons. But I chose to go after the big wins, and then felt okay spending money traveling the world, grabbing a cocktail after work, having a latte at a coffee shop on Saturday, and using disposable toilet paper.

So how long will it take her to save up $625,000 through lazy and uncomplicated investing? It’s less than 15 years: 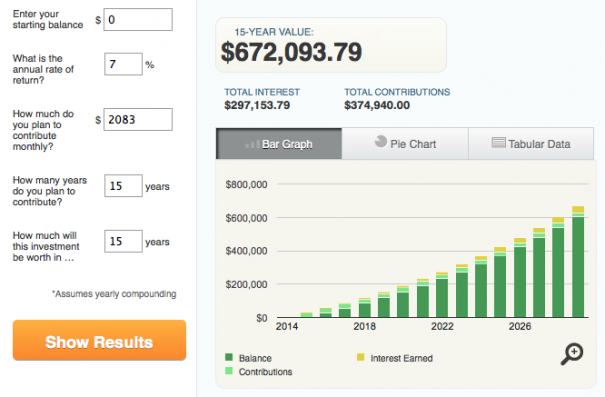 That also assumes she won’t make any more money than she currently makes. So if she gets a promotion or finds a new job and negotiates another $10,000, $15,000, or even $20,000 in salary she’ll be able to retire even faster.

But most people who make more money spend more money because they feel entitled to a certain level of wastefulness. That’s one reason why the net worth of Americans never exceeds $250,000:

Henry Blodget (more on him here), wrote an article about how much you need to save each month to retire with $1 million. Reading through the comments it was disturbing how many people have a Rick Ross attitude of YOLO when it comes to their money.

We probably all know people like this. How many years will go by before they realize they’ve gotten themselves into a major financial emergency? And when they do, will it be too late? Will they be forced to work until they die like 37% of Americans? I was happy seeing one person who gets it:

Financial independence wasn’t hard for me. It only took me 13 years. What I struggled with was 13 years of second-guessing my goal, spending way too much or depriving myself, dealing with naysayers who said I couldn’t do it, and then getting bad advice from accountants. But I feel like I’m in a good place now.