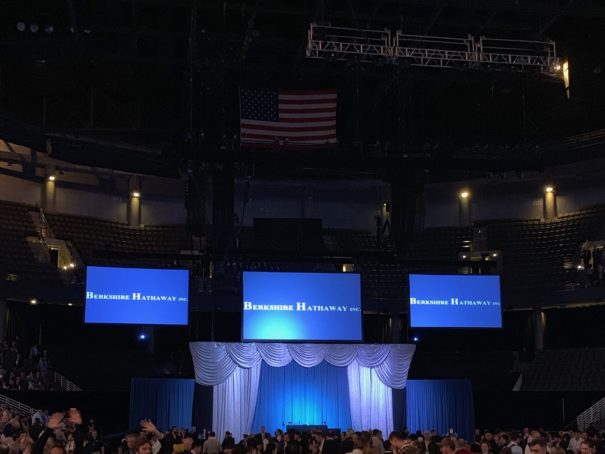 In 2007 I bought shares of Berkshire Hathaway, and so I’ve read every shareholder letter from Warren Buffett, watched the documentary, read the biography. Even made it a point to vacuum up every little scrap of wisdom from sidekick Charlie Munger.

It makes sense then, that you’d attend the annual Berkshire shareholder meeting. Every May thousands of people flock to Omaha, Nebraska, for this so-called “Woodstock for Capitalists.”

A quick check of the actuarial tables — Buffett is 88 years old and Munger 95 — helped push me to finally make this pilgrimage.

From my home in Madison, Wisconsin, it’s a six hour drive west to Omaha, and so I queued up an audio book. Flash Boys, by Michael Lewis, is about high frequency trading. In other words, using technology to get rich quick.

Insiders will quibble about what constitutes high frequency trading, but essentially it’s a method to “front run” stocks. Here’s how it works. When an investor places an order to buy stock it’s routed to different exchanges to be filled. It doesn’t matter if it’s me buying 10 shares of Apple for $2,000 or a pension fund buying 100,000 shares for $20 million, we all visit exchanges.

The problem is time. It takes time for buy orders to make their way to these exchanges, and so traders have learned how to “ping” them, in order to check what buy orders are waiting to be filled. After they’ve gleaned this information, for instance that someone wants to buy Apple, they can quickly run ahead to buy the shares from another exchange, and then turn right around and sell them for a slightly higher price.

You might think this sounds impossible, but this entire game is being played in mere microseconds, or one millionth of a second. In short, these traders have netted millions of dollars preying on investors. Plus, they don’t take much risk: there’s always a buyer lined up.

After arriving in Omaha you immediately start meeting other Berkshire shareholders, and I’m thinking they couldn’t be more different than high frequency traders. They’re just small-time investors, like you and me.

And while spotting these celebrities is fun, it’s almost more satisfying to know you’re rubbing shoulders with millionaire-next-door types. The people who’ve made small fortunes with long-term buy-and-hold, just like Buffett and Munger advocate.

That’s why it feels so homey at Berkshire. You’re meeting these other down-to-earth investors in Nebraska, and it’s so far removed from any Wall Street shenanigans.

The biggest benefit of the meeting is the question-and-answer session. Buffett and Munger sit up there on stage, just the two of them, and field hours of shareholder questions. Most of them we’ve heard before.

“Why has the S&P 500 been outperforming you guys?”

“Any updates on succession planning?”

As you’re sitting there in the arena, surrounded by 40,000 other shareholders, you tend to daydream as Buffett rambles on about insurance (Berkshire owns Geico), how compound interest is the eighth wonder of the world, that American capitalism is an unstoppable machine.

When you come back to reality it finally dawns on you. The reason you’re here, listening to Buffett’s long-winded answers and Munger’s direct ones, is because it’s oddly soothing. Maybe that’s why we’re all here. To have a couple guys who’ve been doing this for decades tell us everything will be okay.

Now, more than ever, we need to hear this.

The market — the world — seems more volatile, information is moving at faster speeds, and software is eating everything. In fact, these are the very reasons something like high frequency trading exists. Which reminds me of something Buffett wrote in 1967:

“I will not abandon a previous approach whose logic I understand (although I find it difficult to apply) even though it may mean foregoing large, and apparently easy, profits to embrace an approach which I don’t fully understand, I have not practiced successfully and which, possibly, could lead to substantial permanent loss of capital.”

It’s always tempting to do whatever’s popular right now, jumping from one investment to the next, trying to get rich quick. That’s why it’s refreshing to be a Berkshire shareholder. It means being disciplined, buying wonderful companies at fair prices, ones with durable competitive advantages, and simply letting time do the work.