Get $25 Off Ting Devices or Service! I want to spread the awesomeness of Ting because I think it’s a great service. Therefore I am providing this referral link which will get you $25 off either Ting service or a device purchased from Ting.

Ting is a cool cell phone provider that came into existence in 2012, backed by Tucows. Ting is what’s called an MVNO, a Mobile Virtual Network Operator, which is  just a fancy way to say that a phone on Ting uses Sprint’s network, but Ting sets it’s own prices for users.

So what’s so cool about Ting, besides its name? Well, as a longtime user of Verizon and US Cellular, frankly Ting is a breath of fresh cellular air. Here’s some of the reasons that make Ting awesome:

On a side note, I recently decided to switch to a smart phone, using Ting, from a dumb phone. Originally looking at getting service from Republic Wireless, who offers unlimited data, talk and text for $19/month, I chose Ting based on the fact Republic offers only one phone option, the Motorola Defy XT. 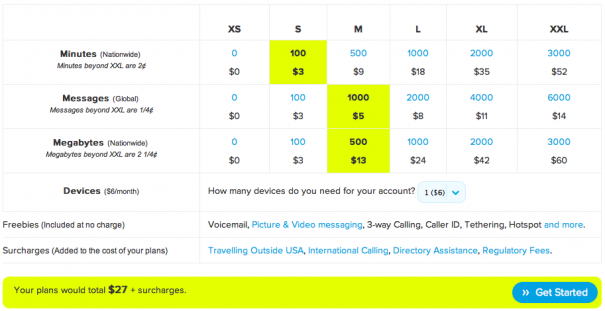 You pick your Ting plan based on what size you think you’ll need, from XS to XXL, and Ting will bump you up or down depending on what you actually use during the month. I chose to pick XS across the board which forces Ting to bump me up sizes as I use minutes, messages and megabytes over the month.

How to switch to Ting

Switching to Ting was a breeze. You have the option of buying a new phone from them, buying a used phone from them, or bringing your own Sprint device from the supported list. I chose to buy a used Samsung Galaxy SII from eBay for $150. If you choose to bring your own device, activating it with Ting involves a few steps on their easy-to-use website and some online instructions to program the phone for 4G and MMS.

Here’s where the cool stuff happens!

Shown above is my usage half way through a billing month. Essentially, I will close out this month with no charges for minutes or texts, and the “small” size for megabytes, with a total bill of $9 (that includes a flat $6 monthly device fee). You might be wondering how I use no voice minutes or text messages per month in this day and age. That’s where Google Voice comes in!

When I made the switch to Ting, I also ported my longtime phone number to Google Voice, for a one time $20 fee. That means when people call or text me it goes to Google Voice first.

Within Google Voice, I made a few key configurations. First, I set up my voicemail there with this configuration:

When someone calls me and leaves a voicemail now, it shows up in my Gmail account where I can either play the message or read the automatic transcription to text, pretty cool.

Second, I set up text messages to forward to my Gmail account:

Now, when someone texts my phone I can easily respond within Gmail, and it looks just like a regular text message to the recipient.

By doing this, I can take advantage of Talkatone and AutoAP, covered next, which is why my minute and text usage is typically zero and I only pay for data.

Talkatone is an app available for iOS or Android which allows you to make free Google Voice calls and texts over Wifi. For me, this is powerful because I have access to Wifi at home and at work, which is where I spend the majority of my life (for now!).

To use Talkatone, you simply install it and enter your Google Voice account information. You are then able to make free calls and texts over Wifi! Taking this to the next level, I installed an app, available for Android only, called AutoAP. This app automatically enables Airplane Mode (turning off the cellular connection) when successfully connected to a Wifi network which helps to conserve battery.

On a side note, another very popular VoIP app like Talkatone is GrooveIP. While I tested this app, I preferred Talkatone for better phone clarity and integrated texting.

Ting has a great feature that allows you to set an alert or hard cap on usage. When these caps are exceeded, you can choose to notify yourself via email or text and even disable that service until the next billing cycle. You could potentially configure this to guarantee your monthly bill won’t exceed a certain cost!