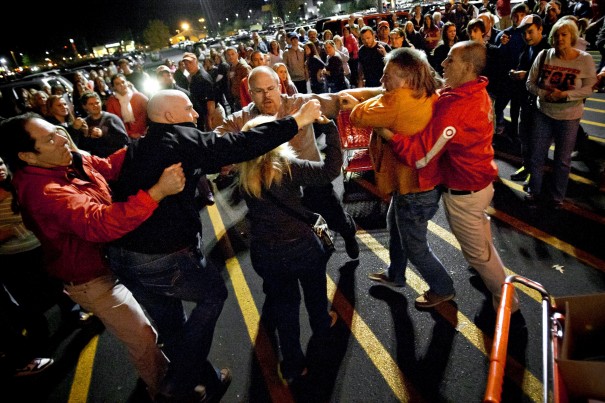 Last year me and my girlfriend exchanged Christmas gifts. She bought me an hour-long massage and I bought her a bright yellow yoga mat

When I asked her last week what she wanted this year for Christmas she said, “You know we don’t need anything. Instead of exchanging let’s get stuff for people who actually need things.”

So this year we’re going to get “pj’s, slippers and Teenage Mutant Ninja Turtles Movie” for a 4-year-old boy and “dolls or anything related to play cooking, she could also use some new clothes in size 3” for a 2-year-old girl.

Providing each kid with about $50 of stuff they need is way more fulfilling than adding cheap plastic junk to my house.

Most of us will spend over $700 on gifts this year. During the Thanksgiving weekend we collectively spent $50.9 billion (which some news headlines called a bust) and Cyber Monday brought in $2.65 billion.

I wonder how we can spend that much money because I just can’t wrap my head around those numbers. 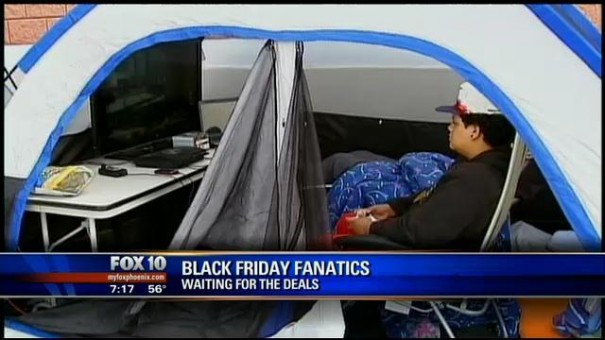 Black Friday is typically described by the media as the busiest shopping day of the year. It’s so successful because they promote the hysteria, the lines, and the shortage of products which creates a positive feedback loop.

This happens year after year.

What I find amusing is that the named holiday shopping days like Black Friday and Cyber Monday are mere inventions. The National Retail Federation (NRF) created these days and then successfully convinced the media to latch on. It’s quite brilliant.

And I love watching all the pros shoot their footage for the media:

Kids are stampeded. Profanities are shouted. Adults push and shove each other. Credit cards get worked out. It makes for great news.

Cyber Monday is the latest phenomenon in what I’m going to call the media / holiday shopping complex. It was started by the NRF with this press release in 2005. Yes, a day when we fork over $2.65 billion from behind our keyboards is because of a press release.

Because we need yet another named holiday shopping day we now have Gray Thursday, when retailers open their doors on Thanksgiving. So the trend continues.

To me, it seems amazingly easy to start a new shopping day to get people to buy more stuff. Here’s what you need to do:

It’s so successful because people love to buy what other people are buying and they feed off the mob dynamic that’s created by scarcity and fear (and Apple is a master of exploiting this).

What I don’t understand is why mere hours after we spend time appreciating everything that we already have on Thanksgiving day – our friends, family, relationships, health, home – we go absolutely f’ing crazy buying cheap plastic junk.

How many of us already have overflowing drawers, closets, and garages? Do we really need more crap?

I had Gmail set up to automatically email me every morning “HAPPINESS IS A CHOICE”. But I recently changed it to say “APPRECIATION NOT EXPECTATIONS” because that’s what Tony Robbins reminds himself every day. And he’s right.

If we appreciate the things we already have then life becomes much simpler. Buying more crap doesn’t make us:

1. Happier. The thrill from buying new stuff is short-lived, it’s just like a junky getting a drug fix. If there was something that we could buy to actually make us happy then our homes wouldn’t be so cluttered. The reality is that happiness is a choice we make.

2. More fulfilled. No one says on their death bed that they wished they had bought more stuff, except an insane person. What the dying say is that they wish they had followed their dreams, spent more time with their family and friends, and had expressed their feelings.

3. Better than others. Driving a fancy car, owning multiple houses, and having a walk-in closet stuffed with clothes and shoes doesn’t mean anything. It’s just consumption. Standing for something and having an impact on this world is ever-lasting, our stuff isn’t.

4. Free. Charles Bukowski said, “Slavery was never abolished, it was only extended to include all the colors.” We’re a slave to our possessions because we don’t own them, they own us. Learning to live with less reduces expenses which ultimately means freedom.